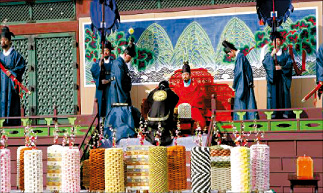 A reenactment of King Gojong’s birthday in Gyeongbok Palace in 2005 by the Korea Cultural Heritage Foundation. [JoongAng Ilbo]

Every birthday’s special. You get, if you’re lucky, some frosted cake and a pile of beautifully wrapped presents.
But the birthday party taking place over the weekend is more than your average get-together, not only by size but also by meaning and location.
The Korea Cultural Heritage Foundation is reenacting the 41st birthday celebration of King Gojong in Gyeongbok Palace. The original celebration took place in 1892.
The last time the foundation held a birthday ceremony for Gojong was in 2005.
The event is part of a major project run by the cultural foundation to promote the royal court’s culture as a tourist attraction.
King Gojong’s 41st birthday is significant as it not only marks the 30th anniversary of his coronation as king of the Joseon Dynasty, but it is also the first year that he came to rule.
Previously the nation was managed by his father, Yi Ha-eung, better known as Heungseon Daewongun.
The ceremony will be held at Geunjeongjeon, the main hall in Gyeongbok Palace. More than 320 actors and dancers will take part. The ceremony lasts for 90 minutes.
Along with the rituals based on historical records, there will be traditional dances and court music, including mugo in which dancers beat small drums.
If you want to join in, you can sign up via the foundation’s Web site.
Although there is no limit to the number of people who can join in, there is an age limit. If you want to play the role of the king, you have to be in your 40s. The crown prince role is limited to younger volunteers between the ages of 20 and 25.
For administrative officials, you should be aged between 20 and 50.
The volunteers will be notified about rehearsals.
You can also try on traditional Korean attire of the royal court during the ceremony.

*The ceremony will be held at Geunjeongjeon, the main hall in Gyeongbok Palace. The three-day event starts at 2 p.m. on May 23.
For further information visit www.fpcp.or.kr or call (02) 3011-2156 or (02) 3210-1645 on the days of the ceremonies. Visitors pay only for the Gyeongbok Palace admission ticket.