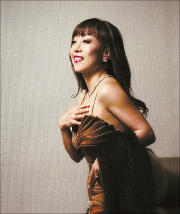 Italy has long been a part of celebrated Korean soprano Sumi Jo’s life. Now, Italy has recognized Jo for her contributions to opera with the International Puccini Prize
“Italy is where I studied opera and also where I made my debut as an opera singer. So it is a great honor to be recognized by the country,” said Jo, upon hearing the news that she will receive the award this week.
The International Puccini Prize is a variation of the Puccini Prize, established in 1971 to honor illustrious personalities and productions in international opera.
Past recipients include conductor Lorin Maazel, the late soprano Renata Tebaldi and the late tenor Luciano Pavarotti.
The Puccini Prize is named for Giacomo Puccini (1858-1924), an iconic composer of Italian opera. To mark the 150th anniversary of Puccini’s birth this year, the Puccini Festival Foundation and Italian Cultural Institutes worldwide established the International Puccini Prize, according to the Italian Ministry of Foreign Affairs. Jo is the first Korean recipient of the prestigious award, a release from the Italian Embassy and Italian Cultural Institute said.
“Since the Italian Embassy and the Italian Cultural Institute in Korea have designated this year as ‘Italy in Korea’ year, we recommended Jo to the Puccini Festival Foundation,” Lucio Izzo, director of the Italian Cultural Institute, said. “The foundation also highly recognized Jo’s beautiful voice and her contributions in breathing life into Puccini’s works.”
The award ceremony will take place after Jo’s concert in Seoul on Friday at the Seoul Arts Center lobby. The concert is part of her six-city “Viva Italia!” tour across Korea.
“I want to introduce Korean audiences to the beauty of Italian music, so the program mainly features Italian songs,” Jo said. “I will perform decorative pieces by baroque composers like Handel, Scarlatti and also some romantic tunes by Rossini, Donizetti and Bellini.”