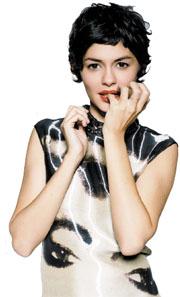 
If you think French actress Audrey Tautou comes across as an arrogant and audacious seductress in Priceless, you might not be alone.

You should forget the considerate and thoughtful Am lie Poulain in Jean-Pierre Jeunet s movie Am lie (2001). Her goal in Priceless is no longer helping others.

In the recently released Priceless, directed by Pierre Salvadori, Ir ne (Tautou) is a materialistic character who wanders the southern French coast looking for a millionaire. 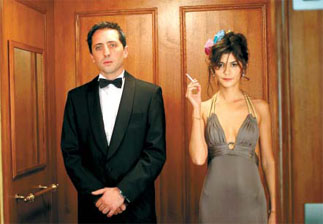 Audrey Tautou reveals a different side to her image in her new movie Priceless. [JoongAng Ilbo]

At first, Ir ne seduces Jean in the hope of gaining a high position in society. She even breaks into Jean s funds and installed savings.

Her friends still love her, though. She plays tricks on her lover, but she is unpretentious and modest. On the inside, she longs for her true love, like all her previous characters.

In A Very Long Engagement (2004), Tautou holds onto the cherished memory of the man she loves. She waits for him when they are separated by war.

In He Loves Me Not (2002), Tautou is an art student as well as an aggressive and persistent stalker.

In most of her films, she plays the role of the lover. Perhaps that s why director Salvadori pictured Tautou as Ir ne when he started writing the script.

The role was a challenge to Tautou, though she said she laughed out loud when she read through the story the first time.

The story was quick-witted and emotional. I had no second thoughts about taking the part, said the actress, though she had never played such a seductress before on screen.

I thought playing Ir ne would be a new experience, she said.

Ir ne allows me to present a new image of myself as an actress on screen, she added.

Though Ir ne is materialistic, she s not ostentatious or showy. She s just being true to her nature, Tautou said.

When she began rehearsals and shooting, Tautou said she immersed herself deeply into the role of the character.

When she read the script the first time, it was like the initial reading for Am lie, she said. In fact, she said Ir ne and Am lie are similar they live in a fantasy.

Ir ne wants a prince who can turn her into a princess, and she wants to wear fancy dresses and branded accessories.

But later on, she realizes that true love and happiness aren t all that, Tautou said.

Ir ne begins to find answers when she meets and falls in love with Jean.

Am lie also longs to find her true calling, a mission that she accomplishes with the help of others.

Tautou imprinted herself on the hearts of her fans after she played Am lie, which may have been difficult to get over. But Tautou hasn t hesitated to move on.

There s no reason I shouldn t work on other films, she said. Every time I do a new film, I learn new things. I learn not be fearful in life.

Also, she said she has got to know herself better.

Most of her previous films have been films about love.

Romantic comedies are charming only if the characters are natural and not superficial, she said.

To Tautou, such movies are essential to life.

[These movies] don t ask for deep thinking, she said. They deliver truth and ask for deep emotions. They remind you to appreciate the good times.

Though Tautou is known as one of the top actors in France, she s got her feet planted firmly on the ground.

What she hopes is that directors and fans don t distort her image or misjudge who she is. I m just like another person in a neighborhood nothing special, Tautou said.