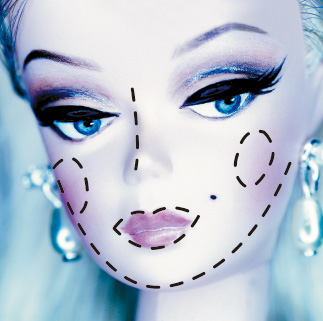 When Hong Hae-sol saw an ad for free cosmetic surgery at a local clinic last year, she jumped at what she saw as a great opportunity.

Hong, a 19-year-old college sophomore, has dreamed of going into the entertainment business, and she thought a new face would increase her chances of success.

The deal went like this: Women who had the most successful surgery would win the “Plastic Beauty Model Contest,” a pageant promoting the clinic’s latest beauty technology.

Out of 500 contestants, the jury selected five women. Hong was one of them. She underwent an intensive five-hour operation that would have cost her 13 million won ($12,389) had she paid herself.

The procedure altered her face in five places. The surgeons sharpened her nose, widened her forehead, reduced the size of her cheek-bones, injected fat around her jawline to make a rounder face and touched up her eyelids. (She’d already had her eyes done before to make them look bigger.)

She came third in the contest.

“We ran a survey before the contest and asked people what they thought the financial loss is for someone who doesn’t have an appealing look,” says Jo Seon-hee, a publicist for Real Clinic, the contest’s sponsor.

“Respondents in their 20s said the cost was between 200 million won to 900 million won. On average, people thought that a person would lose 86 million won looking less attractive,” says Jo.

In a society where plastic surgery is a national obsession, Hong supports young women who decide to improve their looks through medical science.

“After we took the college entrance exam, 10 of my friends went to a plastic surgeon and got our eyelids done,” she says. “It was very natural for us. I don’t think it was even an issue.”

The 2004 survey, the most recent government poll of its kind, released by the former Ministry of Health and Welfare, is more telling. 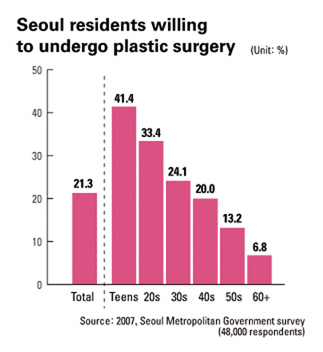 It said more than half of Korean women (53 percent) had cosmetic surgery by the time they reached college, and 82 percent aimed to have liposuction. About 5.8 percent of men had undergone plastic surgery.

Nine out of 10 surgeries at private clinics run by plastic surgeons here are beauty-related, according to the Korean Cleft Palate-Craniofacial Association.

No wonder Korea is often called the Republic of Plastic Surgery in the media.

Eyelid operations and liposuction are mild examples. Other surgeries are more extreme, such as eye-whitening treatment.

The desire among Koreans to whiten parts of the body has moved from teeth, skin and now to the eyeballs, it seems.

Kim Bong-hyun, head of Seer and Partner in Seoul, claims his company is the world’s first, and Korea’s only, cosmetic eye-whitening center.

Kim’s procedure works on the same principle as cells recuperating as a wound heals.

According to Kim, the conjunctiva, a layer of tissue that stretches over the outer surface of the eye, loses its luster as one ages.

Kim claims the surgery takes less than 10 minutes and is painless.

Patients whose eyes have yellowed due to disease like glaucoma, which affects the optic nerve, cannot undergo the surgery, Kim says.

His work is commendable, Kim claims, because it gives people self-confidence.

In a survey of 173 patients at Seer and Partner conducted between 2007 and 2008, 93 percent said they had trouble making eye contact with other people because of their yellow eyes.

However, the Korean Ophthalmologists Association is less enthusiastic about Kim’s claims for his work.

On April 23 this year, the association said Kim’s surgery is very similar to other eye surgeries used in treating conditions that discolor your eyes.

Kim Sung-joo of Kim’s Eye Hospital in Yeongdeungpo District, Seoul, said removing the conjunctiva runs the risk of cutting off nutrition supplies to the sclera, the white part of the eye, which could lead to visual impairment.

Significantly, more doctors here are growing alert to the commercialization of medicine and the reasons why people demand plastic surgery.

“A complex web of psychological problems can drive people into having plastic surgery,” says Kim Sam, a plastic surgeon who specializes in face remodeling.

Kim observes that people think getting plastic surgery nowadays is like getting your hair done at a beauty salon.

“A skilled doctor should invest a fair amount of time with a patient, going over his or her psychological issues, just like a professional counselor,” he says. “But often it’s the opposite. Many doctors try to accommodate their patients’ needs and stress the importance of beauty.”

It’s extremely rare even in university hospitals here for patients wanting plastic surgery to get sent to a psychiatrist, says Jang Chung-hyeon, a plastic surgeon at Kangbuk Samsung Medical Center.

The system is different elsewhere.

Ten years ago, when Jang was first assigned to Japan’s Kitasato University Hospital as a visiting professor, he said there was a collaborative treatment and diagnosis system between the hospital’s psychiatric and plastic surgery divisions.

When a patient arrives at the hospital’s plastic surgery division for the first time, it is mandatory for the doctors to question the patient about his or her psychological state.

If the line of questioning throws up any suspicious signs, the prospective patients are sent to the psychiatric division for further checks and consultation.

“If plastic surgery were conducted like that in Korea, the industry would collapse,” Jang says.

They want to prevent possible claims should procedures go awry.

However, the social taboo against psychiatric treatment here discourages many plastic surgeons from recommending that their patients undergo psychiatric consultation.

“I hear from plastic surgeons that they sometimes feel they should tell some of their patients they need help,” says Choi Si-young, a private psychiatrist in Ilsan, Gyeonggi. “But they end up making all kinds of excuses. Even though there is a problem, most dare not mention it and just tell their patients what they want to hear.”

The doctors find that peer pressure and social factors push many women and, increasingly, more men into booking an appointment with a plastic surgeon.

Last year, Daks Club, a local matchmaking company, organized an event for its members that offered free plastic surgery to a group of women.

Two thousand signed up and candidates were narrowed down to those who had not found partners, possibly because of the way they looked, the club says.

After the surgery, the women had better responses from men, the company claims.

It’s society’s fault, some people say. “Many women in Korea are still more likely to be chosen than to choose,” says Ha Bom-joon, the president of Real Clinic, which is why one’s looks are critical to finding a partner.

“However, many Koreans are excessively addicted to cosmetic changes.”

She said Koreans tends to be more obsessed than other people about looks.

While the medical community only focuses on success, it should also be honest about the negative results of cosmetic surgery, Lee argues.

This might serve to prevent excessive abuse of cosmetic surgery, particularly among young Korean women.