Battles for the future

Battles for the future 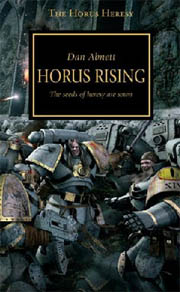 If you don’t read science fiction, it may be hard to warm to “Horus Rising, Horus Heresy Book I” by Dan Abnett, a British comic book writer.

It presents a future warfare scenario involving space marines that will have you saying to yourself, “Yes, that’s how war will look in the future.”

The battle scenes are vivid, in particular the ones during the opening pages of the novel.

Those images will stay with you until the end of the novel, and perhaps even longer.

The book grew from the universe of Games Workshop’s “Warhammer 40,000,” a popular science fantasy board game that dates back to the early 1980s.

Set in a fictional universe in the 41st millennium, the game depicts future combat between various armies.

The book acts as a kind of science fiction compendium to the game, but you don’t have to have had the Warhammer experience to immerse yourself in the story.

In the first volume, the Emperor of the Imperium hands over command of his armies to Warmaster Horus, his son, as he returns to Terra to consolidate the newly annexed planets and worlds.

Horus is to continue the Great Crusade of the universe, i.e. conquering other worlds.

The story is centered around the genetically engineered Imperium marines and their heroics on the battlefield, each unit having a different name such as Luna Wolves.

The book is mainly written from the perspective of the Luna Wolves captain, Garviel Loken.

It’s only the beginning of the Horus series, and there are hints throughout the plot that anticipate the kind of chaos that could justify sequels.

The basic story relates how Horus betrays the emperor, an act that starts a civil war in which the space marines’ loyalty is divided.

But this is a story for the next books in the series.