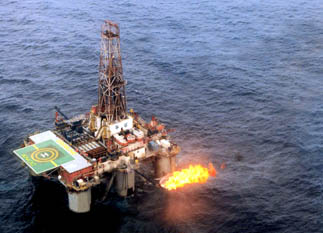 An offshore rig of the Korea National Oil Corporation drills for oil in the South China Sea off Vietnam. [NEWSIS]

The rapid growth of emerging markets such as China and India has triggered a booming, long-term demand for natural resources that will make business strategies increasingly important.

The resource-poor Korean economy is particularly more prone to supply and price volatility in global commodity markets. But at the same time, the giant financial windfall that resource-rich countries are enjoying presents a broad array of business opportunities for Korean companies. Seizing these opportunities is all the more necessary since Korea’s trade deficit with resource-rich countries is steadily widening, reaching $48.2 billion in 2007 from $19.2 billion in 2000.

Countries that have a wealth of natural resources but lagged behind less endowed countries, a phenomenon that economists call the “resource curse,” are gaining economic muscle and laying out extensive development plans that will present further opportunities for foreign companies, especially those involved in construction, engineering and other social infrastructure sectors. The representative countries are Middle East oil producers, Russia, Canada and Australia.

Although there is a huge gap in per-capita income among these countries ($5,724 to $79,154), the difference is shrinking rapidly, especially in the Middle East, where per-capita income among the oil producers was $22,282 in 2007, a 186 percent leap from 2000. Furthermore, Russia and Saudi Arabia, the two major crude oil exporters, boast a trade surplus of around $140 billion. Russia exported $190 billion of crude oil in 2006, and Saudi Arabia $188.5 billion.

Moreover, the influence of the resource-rich countries in world financial markets has increased dramatically. Middle East oil producers owned $2.2 trillion in foreign investment assets at the end of 2006 and were the largest capital supplier in the world. The region possesses $1 trillion in overseas stocks, taking up 2 percent of the total market capitalization of the world, while it invests $300 billion in overseas hedge funds and private equity funds. The United Arab Emirates hold the largest amount of foreign assets at $802 billion, followed by Saudi Arabia with $698 billion and Kuwait $291 billion.

At the end of September 2007, they accounted for 73 percent, or $2.1 trillion of the $2.9 trillion in sovereign funds around the world. Much of that money has poured into foreign assets, including major American investment banks suffering from the U.S. subprime mortgage fallout.

A surge in domestic demand, especially private consumption and construction, has accompanied the capital windfall from record commodity prices. More than 2,000 construction projects are expected to start between 2007 and 2012 in the Middle East with total costs estimated at $1.3 trillion. Further resource development, diversification of industries, and construction of public infrastructure are primary areas.

The national development strategy introduced by oil producing countries in the Middle East, Russia and Central Asia has boosted demand for production facilities, power facilities and pipelines. Supplier nations have erected barriers to outsiders interested in joining oil field development. However, easier access is being given to foreign participation in natural gas development projects, as characteristic of the business.

Resource-rich countries are also competitively investing in new city construction, which will likely increase demand for construction and engineering, and increasing infrastructure investment for a more IT-based social and economic structure.

Niche markets, which global companies have yet to take an interest in, or businesses that Korea has particular strength in such as the “Ubiquitous City,” or U-city, concept in which all information systems are linked, could promise potential growth.

Equally crucial is securing corporate capability through mergers and acquisitions or strategic alliances to cope with resource-rich companies.

This is all the more so for resource-related companies, including Korea National Oil Corporation, Korea Gas Corporation and Korea Resources Corporation. They need to devise differentiated business strategies by benchmarking the growth strategies of global resource companies.