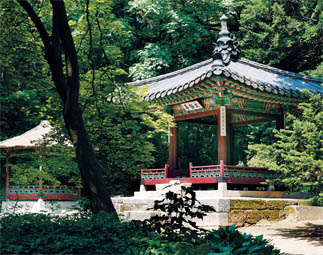 However dark or sorrowful life is, the sun never misses her morning / However many love-hate moments trailed in life / The sun still rises / It shines both light and shade upon the outside world / Nature remains still.”

The mystery of nature is wonderful.

I’m no poet, not like Shakespeare. But nature made me scribble down these words as I experienced the overflowing joy and beauty surrounding me as I lay on the wooden floor of Cheongeui Pavilion at the Secret Garden in Changdeok Palace, central Seoul.

When I wrote the poem, I was looking up at the majestic ceiling, decorated in a style called dancheong. 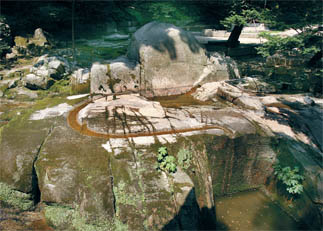 Ongnyucheon, where kings floated glasses of wine and wrote poems.

When I closed my eyes, the light danced before me. I opened my ears to capture the sounds of nature. Woodpeckers and bumble-bees were singing nature’s symphony.

The branches of a 300-year-old yew tree swayed in the breeze, adding an extra dimension to the rich visuals and sounds.

I wasn’t deep in a forest or hidden on some remote mountaintop. I was in the heart of the capital immersed in nature.

Changdeok Palace, one of the five grand palaces built by the kings of the Joseon Dynasty (1392-1910), is packed with tourists most days. This is where government affairs were handled for 270 years before the colonial period began.

From top to bottom: A four-line poem by King Sukjong written on the rocks near Ongnyucheon; the colorful ceiling of Cheongeui Pavilion. By Kwon Tae-gyun

A tour normally starts from Donhwa Gate, the main entrance, and goes to Buyong Pavilion, an octagonal building where the king and his subjects studied together. The pavilion is shaped like a floating lotus.

But there are hidden parts of the palace, and as I strolled northwards from Huwon I came to a secluded garden created in 1405 during King Taejong’s reign (1400-1418). This is Biwon, the Secret Garden. Here, in the northern reaches of the palace grounds, members of the royal family studied, performed rituals and practiced martial arts.

Nature has been undisturbed here for many years. The garden wasn’t open to the public for 28 years. Managers of the palace grounds wanted to preserve the area. It opened to the public in 2004

“Unlike Gyeongbok Palace, Changdeok Palace is located on a hillside landscape,” said Kim Jin-suk, the palace guide. “[So] it is more vulnerable. There are many secret and closed-off areas.” 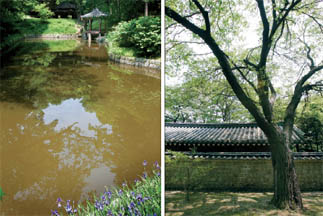 Bando Pond (left) and a 400-year-old mulberry tree (right) on the path to Ongnyucheon from Buyong Pond. By Kwon Tae-gyun

Ongnyucheon, located in the most upper area of the Secret Garden, was where I was headed. It used to be a private resting area for the kings. It was built in 1636 during King Injo’s reign (1623-1649).

On the way to Ongnyucheon is a notable Pavilion called Gwallam Pavilion, which stands on Gwallam Pond. It is also called the Bando Pond because it is shaped like the Korean Peninsula. Bando means peninsula in Korea.

The pavilion is grounded by six round-pillared cornerstones, four of which are set deep beneath the waters of the pond.

The building’s sides are fan-shaped and the railing is elegant and refined. If the weather is clear, you can see both pavilions reflected in the pond. 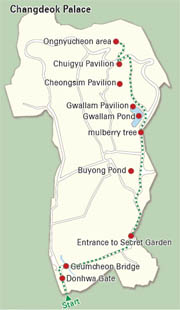 There’s a sad history about this place.

According to Kim, the guide, the Japanese rebuilt the pond during the colonial period (1910-1945) to make Korea look upside down. The northwest part of the current pond marks the south and the southeast marks the north.

From here it is a 10-minute walk to the Ongnyucheon area.

Walking between the leafy trees, I let my imagination flow. It’s the kind of scenery you might expect in a fantasy story. I imagined a mountain wizard approaching me as a sea of fog enveloped us.

At first glance when I got to the Ongnyucheon area, I counted five different shaped pavilions surrounding Soyoam, a stone where water flows around a U-shaped brook.

Injo (1595-1649) is said to have inscribed “Ongnyucheon” in Chinese characters on the nearby stone wall, and King Sukjong (1661-1720) is thought to have written the four-line poem written above Injo’s inscription.

Translated into English, the poem reads: “Three hundred strings of water are falling from the sky / White rainbows are falling forming a valley / The sounds of thunder and lightning.”

There is a waterfall here, but there was no water: The weather is too dry at this time of year. I’d have to come back during the rainy season to see Sukjong’s waterfall.

The poet-king might have taken some liberties with his descriptive lyricism, but as I stood there I began to understand why a writer would use such hyperbolic language.

During Injo’s reign, the country went through severe hardship, especially when warriors of the Qing Dynasty (1636-1912) in China invaded Korea.

Injo would come to this spot to relax and mediate. He would float a cup of wine on the U-bend brook and try to recite a poem before the cup returned to him. High-ranking court officials would join.

My worries are nothing compared to Injo’s, but as I faced Soyoam, I close my eyes and made a wish, that my worries would drain away with the waterfall, clearing everything away.

In fact, ongnyucheon means the stream of jade-clear water in Korean.

Behind the Soyoam is a royal well named Eojeong. It’s covered with a pyramid-shaped capstone and gushes fresh water into Changdeok Palace, or so it is thought.

According to Kim, the water in the stream is often described as bejeweled with jade-blue beads.

Each is designed differently.

My favorite is Cheongeui, where I lay and wrote my poem. It’s shaped like a thatched cottage. Cheongeui in Korean means clear, little waves. The pavilion’s dancheong is round and rectangular, symbolizing both the sky and ground.

Chuihan Pavilion was used as the kings’ resting area and an outdoor library, since it provides copious amounts of shade.

Like one of the kings of old, Michael Jenson, a tourist from Denmark, and John Dolginko from New York, were resting there one morning this week.

“The palace seems preserved under the original forest landscape,” Jenson said. “I feel a sense of nature as I walk up and down the trail.”

If you want to escape the hustle and bustle of the big city, one of the pavilions in Ongnyucheon is recommended.

As I walk back towards Buyong Pavilion in the main palace area, I recite my poem.

The footsteps I take in life should match my heart-so should yours. You have to be honest with yourself, in the same way nature is.

It’s a lesson I learned at Cheongeui Pavilion.

Changdeok Palace was put on the Unesco World Heritage List in 1997. Palace tours are available everyday except Mondays.

When visiting the Ongnyucheon area, there are two options.

You can join a special two-hour guided group tour (3.1 kilometers, 1.93 miles). The trail starts from Donwha Gate and passes by several pavilions and ponds including Buyong and Gwallam Pond.

The other option is make your way to Ongnyucheon by yourself.

You can do this only on Thursdays, when the palace is freely open to public.

To reach the palace, go to Anguk Station, line No. 3, exit 3. It takes five minutes by foot from there.