A tireless collector of ancient tiles

A tireless collector of ancient tiles 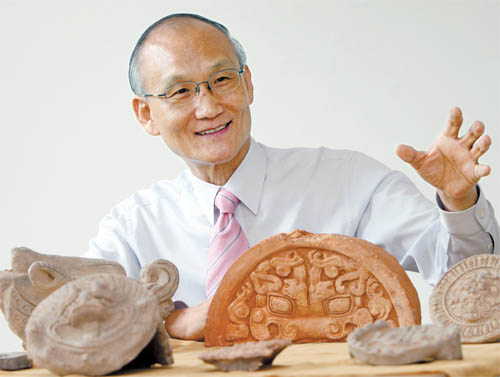 Two exhibition halls at the far end of the Donation Gallery on the second floor of the National Museum of Korea transport visitors to ancient East Asia with an array of differently shaped, colored (and damaged) roof-end tiles.

After becoming enchanted with ancient roof tiles in 1978, Yoo begun collecting them. Hoping others would also see the tiles’ inherent beauty, he donated 1,873 roof tiles to the museum in 2001.

Roof-end tiles at the YooGeum Museum. Provided by the museum

Roof-end tiles refer to materials usually made of clay and terracotta to decorate the ends of the roofs of buildings.

But whenever he visited the museum, he couldn’t help but feel dissatisfied because he knew the 1,082 roof tiles Iuchi donated in 1987 were not even half his entire collection.

Yoo probably feels a lot better today. He not only acquired those precious roof tiles, but also opened a museum in Seoul that displays them. The YooGeum Museum of Roof-end Tiles, a combination of his and his wife’s surnames, will be the new home for the rest of Yoo and Iuchi’s collection, comprising 2,700 items unearthed in Korea, China, Japan, Thailand and Vietnam.

Yoo bought the rest of the Iuchi Isao’s collection (1301 items) in 2005 from Inuchi’s son Kiyoshi. “He called me saying that I’m the right man for the collection,” Yoo said. “He said he didn’t want to hand it down to his daughter who is not interested in roof tiles at all.” 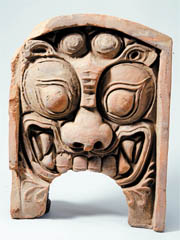 In fact, Yoo had wanted to buy all the roof tile relics possible since he began to work as a lawyer in 2004. But it was impossible to purchase collections tantamount to national treasures, like that of Iuchi’s, and paying the full price.

“I told him I cannot pay him a price that reflects its worth. I told him instead I would share it with the Korean public.”

Kiyoshi agreed and sent the collection to Korea paying the transport expenses himself. For that reason, Yoo considers that the collection has been donated, even though he paid what he could. 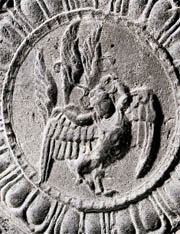 A roof tile with a Buddhist figure from the Unified Silla period.

Yoo’s special love for ancient roof tiles began three decades ago when he was appointed to the prosecutors’ office in Chungju, North Chungcheong.

“I was very interested in Korean art, so I read a lot of books,” Yoo reminisced. “My wife majored in art and she was my tutor. I thought I could be an amateur art historian.”

Yoo explored Chungju whenever he had time. When he found a mystical roof tile that had the characteristics of all three domains of the Three Kingdoms Era (fourth century - seventh century C.E.), he realized he’d found his passion.

“History and culture are embodied on the roof tiles. Sometimes when you look closely, you can even spot the potter’s fingerprints. It feels surreal because even though we are centuries apart, I can feel his spirit. It’s fate that brought us together.”

But it was only recently that old Korean roof tiles were granted historical significance. In late 1970s, it’s said people got them as freebies when they purchased paintings.

“It was April 5, 1978. I remember the exact date,” Yoo recollected. “I went to an antique store to buy a painting and I saw a bunch of roof tiles in a wooden dish. I asked how much they were and the owner told me to just take them. They turned out to be from the Baekje Kingdom (18 B.C.E.-660).” 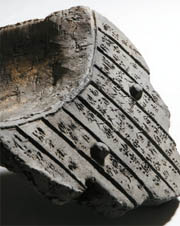 A roof tile from a Buddhist Temple of the Joseon period inscribed with donators’ names.

Yoo said it was easy to collect roof tiles back then. He got some for free. He even unearthed some himself. But things changed in the 1980s as people realized the priceless history roof tiles could tell. From then, Yoo usually exchanged items with fellow collectors or bought from old art shops.

But even Yoo sometimes falls for fakes.

“There was this one roof tile I believed was from the Goguryeo Kingdom. A year after I got it, I found out by coincidence that wasn’t the case. Before I threw away such items; now I keep them, too. Maybe I will hold an exhibition for just those items,” Yoo laughed.

“It is the roof tiles that make me happy and proud, more than my 30-year career in law. I’m blessed to be able to share with others the realization I got from these tiles.”