Playwright and critic Koo Hee-seo, 70, is sitting in a corner of the Arko Arts Theater watching a rehearsal of a play called “Dr. Cook’s Garden.”
Koo has sat through many rehearsals during her career, but last Tuesday’s session took on a different meaning.
The play was being prepared to honor Koo’s work in theater, a feat experts say that few critics ever achieve.

A tribute to a living theater luminary almost never happens.

She worked at the Sports Daily and the Hankook Ilbo until 1994, covering cultural affairs.
In her 24 years as a culture reporter, she never gave up her love of plays, despite the fact that they were unpopular in her day and didn’t get much coverage in newspapers.

She kept on writing reviews, even if they weren’t wanted. “I wrote every day. I never fought with my desk head regardless of what he said,” says Koo.
“Even when my writing ended up in the trash can, I really didn’t care,” she says.
Does she have any regrets? “I wish I’d had a computer at the time.
Honestly, I think about 75 percent of what I wrote got thrown away.”
Before computers, reporters wrote on paper first, after which stories were set to print on rotary presses. 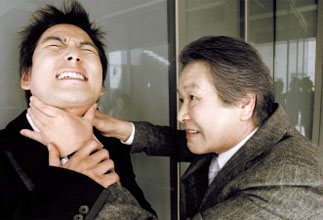 Upon graduating in history from Ewha Womans University, Koo had a brief stint as
a librarian before entering journalism. On her fi rst day at work, she made an impression in the newsroom, but not with her writing.
Koo smoked inside the building on her first day while she worked. In those days, women who smoked in restaurants were booted out for improper behavior.
That act earned her the nickname “the smoking woman reporter.”
Koo never married and surrounded herself with an invisible suit of armor that hardly anyone could penetrate.
Consequently, she focused more on her work, because few people could bother her
while she wrote. The critic explains that her upbringing
may have infl uenced her independent spirit.
Losing her father when she was young meant she had to deal with her mother’s second marriage. Her grandmother helped raise her.
She was a fi fth grader in elementary school when one day after school she discovered her mother’s room was empty and her grandmother was panting with rage.
Her mother had abandoned her.
Koo says that particular experience probably made her such a private person. “If I had been a boy or had I been pretty, would my mother have deserted me? It’s a question I have asked myself over and over,” says Koo.
She met her mother only one more time.
It was after her graduation. Experts say Koo’s work as a critic has
changed the landscape for art critics.
Her writing style became known as “journalistic criticism,” a new kind of genre in writing in Korea.
Armed with fi rsthand knowledge that she gathered as a reporter, she was one of the very first critics to have a journalism background.
Her reviews are easy to understand, mixing broad views honed by not only covering plays but other cultural activities as well, such as movies, art and fashion.
Above all, she provides detailed information about the play at hand, prompting
readers’ interest.
She didn’t make many enemies, people say, as her style is a fi ne balance between constructive criticism and praise.
Some experts say Koo’s vast experience helped her earn her reputation. “I don’t think there is anyone out there who has seen as many plays as Koo has,” says Lim Youngwoon, a theater producer.
“Many critics spend their time evaluating the play. Koo does that, too, but she also looks beyond the play at the effort of the actors and the crew to stage the play.”
Looking back over her career, Koo remembers one particular incident.
“When Lee Sang-jik won the Hee Seo Award, he said during his acceptance speech
that he once felt like giving up acting after I criticized his performance in a newspaper review.
It was then I realized I may have hurt many people’s feelings over the years,” says Koo.
She rarely ventures far from the theater scene these days. It’s been her home for the past few decades.
She never quit, even when hardly anyone read her work, and she’s not going to quit now.