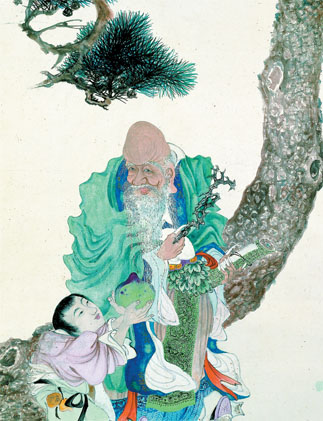 In “Chumangeuknoin”, a boy monk hands the old man, who represents longevity, a mythical peach said to grow in heaven and also believed to aid longevity

A painter in the traditional Korean style, Joseon Dynasty artist Jang Seung-eop continues to infl uence the art form. Those looking for a glimpse into the origins of the currents he began can head to the Jang exhibition now on at the Gansong Art Museum.

Jang, who lived from 1843 to 1897, has been hailed by experts as one of the top three painters representative of the Joseon period.

“The paintings of the Joseon Dynasty refl ect the changes occurring in the society at the time,” said Choi Wan-su, the museum’s research director. “At
fi rst, you had paintings infl uenced by Chinese landscape paintings. But as Joseon developed its own ideology based on Chinese Confucianism, its paintings
changed as well.”

Joseon was on its last legs when Jang was in his prime. In the 19th century, the ruling noble class had been lost power and businessmen and wealthy landowners
were broadening their power and infl uence.

Consequently, Choi explained, painters who used to be required to dwell on traditional themes of knowledge and experience headed in a different direction,
refl ecting more the sensibilities of the painter. Works became more imaginative and less focused on tiny details.
Not much about Jang’s family background is known, yet the artist carved his name in this particular genre of imagination-tinted realism.

His parents and birthplace are lost to history. One legend has it that he learned his trade while working as a young apprentice to Lee Eung-heon, another painter of the era.

Art evaluator Kim Hyeon-kwon said there are offi cial records that show Jang worked as a painter for the royal house. It is said that Jang was a womanizer,
didn’t do well at following the king’s orders and loved to drink. He was said to have a photographic memory, but always added a personal touch to his works. He didn’t overly dwell on structure, instead taking a more free approach.
Jang groomed the Joseon Dynasty’s last court painters, Jo Seok-jin (1853-1920) and An Jung-sik (1861-1919). After the royal painting department closed down, these two went on to sell their paintings for large sums of money for the fi rst time in the country’s history.

The exhibition of Jang Seung-eop’s paintings is on at the Gansong Art Museum in Seongbuk-dong through June 1. Go to Hanseong University Station, line No. 4,
exit 4. For more information, call (02) 762-0442.