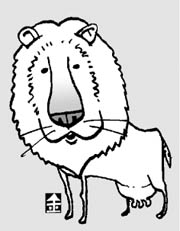 In Greek mythology, the Chimera is a monstrous creature of Lycia in Asia Minor, which was made of the parts of multiple animals. Chimera was commonly regarded as evil, possessing great power. This is because the nature of species were believed to be fixed ? life forms did not change through time from generation to generation ? before the emergence of Darwin’s Theory of Evolution.

However, there are some animals that jump the species barrier. For example, a mule is the offspring of a horse and a donkey. And a liger is a cross between a male lion and a female tiger. These animals are not chimera, since they were born naturally. In biological terms, they are hybrids.

Humans have begun to intervene in the natural exchange between species since 1984. Their first creature was a sheep-goat chimera, produced by combining the embryos of a goat and a sheep. With a mix of shaggy and curly hair, it was not good looking, and did not gain enough public attention.

A chimera mouse was created in 1988. The extraordinary animal, named SCID mouse, has no immune system and thus does not reject cells, blood and organisms transplanted from humans. It is natural for a recipient’s immune system to destroy a new organ. However, a SCID mouse has no ability to form an immune system. Based on this research achievement, Dr. Irving Weissman at Stanford University succeeded in transplanting some human tissue into the SCID mouse, creating the famous SCID-hu Mouse. In 2002, researchers were hugely successful in transplanting human neural cells into the mouse’s body. It raised ethical controversies in the United States.

The British Parliament approved embryonic stem cell research between different species on May 19 this year, for the purpose of continuing to achieve superiority in the field of genetic engineering.

The U.K. has achieved remarkable results, such as its first test-tube baby, Louise Brown, born in 1978 and a sheep named Dolly, cloned in 1996. Some religious leaders and lawyers expressed concerns about the birth of chimera. Meanwhile, some stem cell researchers complained that it has become impossible to carry out embryonic stem cell research between different species, as bioethics laws have been enacted inappropriately.

There are arguments for and against embryonic stem cell research between different species. The question is about exactly when the life of a fertilized egg begins. Do humans have the right to manipulate other animals’ genes? What should we do to give hope to patients suffering from degenerative diseases like Parkinson’s and Alzheimer’s? It is a difficult question to deal with.