Most feared place in Seoul

Most feared place in Seoul

The Joseon Military Police Headquarters at Mount Namsan. By City of Seoul

Tourists stroll toward the traditional Korean village on Mount Namsan in Seoul. They want to see old-style architecture and enjoy the natural surroundings at the foot of the hill that dominates Seoul’s skyline.

Such bucolic pleasures can be enjoyed now, but it wasn’t always like this.

The folk village occupies the grounds where the Joseon military police headquarters stood during the colonial period (1910-1945).

It was one of the most hated places in Korea. It towered over Seoul, a symbol of oppression and fear. 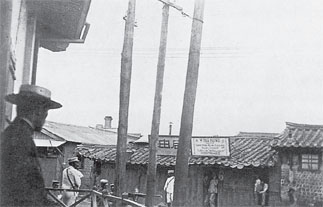 This was where Japan coordinated its 20,000-strong military police stationed nationwide in a bid to suppress the independence movement and maintain an iron grip on the populace.

Experts say Japan opted for a military police presence as a security force rather than regular police units because of the broad range of missions that the security forces stationed here dealt with.

Regular policing was only a small part of the military police’s duties. They occupied themselves more with gathering intelligence on independence fighters or other opposition groups, counterintelligence operations, security enforcement, protection of military installations and tax collection.

Needless to say, the Kempei, the Japanese term for military police, exercised their right to apprehend anyone under suspicion without due legal process.

They were given practically carte blanche to carry out their duties, and torture was standard procedure for extracting confessions and other information. 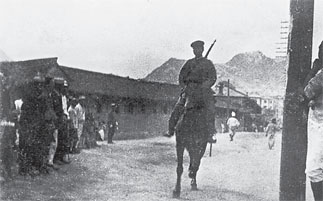 In 1912, the Kempei reinstated flogging, a punishment King Gojong abolished in 1894, and while expanding Japan’s imperial interests in East Asia during World War II, the Kempei honed their skills in population control.

“The Japanese military police was an organ of suppression that stood at the forefront of the occupation,” says Chang Sae-yun, a researcher at the Northeast Asian History Foundation.

“They were feared for their ruthlessness and cruelty. They were fanatically loyal to Japan’s emperor and establishing one great Asia under his rule,” Chang says.

Increasingly using the Korean Peninsula as a forward base to launch military operations in Manchuria, Japan stationed two regular divisions in Korea in 1915. 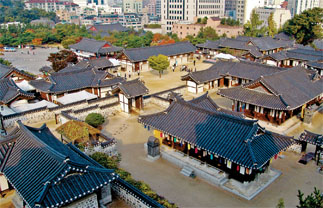 The Namsan Hanok Village stands where the Joseon Military Police Headquarters was located.

It added a third in 1931 when the invasion of Manchuria began. In the 1940s, more than 200,000 Japanese troops were stationed here, as the peninsula was used to provide raw materials and natural resources for Japan’s war machine.

The peninsula was exploited both in terms of manpower for construction projects and raw material until Japan capitulated in 1945.

After the March 1 Movement indicated that the Korean Peninsula was far from subdued and gave the Japanese a scare, police duties were transferred to the civilian police, as Japan opted to trial different approach.

Instead of relying solely on force to suppress the independence movement, it adopted a carrot and stick approach, trying to groom sympathizers and collaborators within the Korean population.

A couple of Korean newspapers such as the Dong-A Ilbo were allowed to publish while other cultural activities were also permitted.

Nevertheless, many Kempei personnel were simply transferred to the civilian police, making the core of the police force essentially the same.

The Japanese military police was the praetorian guard of Japan’s expansionist policy in East Asia. It received extended training that differed from that of a regular conscript.

The following is an excerpt taken from the U.S. War Department Intelligence Bulletin publication in the 1940s explaining the inner working of the Kempei:
“A Jap [sic] who has been accepted for MP duty receives further education in the Kempei schools. An enemy source indicates that in one such school the curriculum included law, the manual of arms, fencing, horsemanship, unarmed combat, languages, espionage and counterespionage.

“Specific attention was given in classrooms to such things as invisible writing, shadowing, methods of entering and leaving buildings, and similar tricks of the detective’s trade.”

Chang Sae-yun explains that the Japanese military police were generally of higher caliber than the regular military.

“Back then, it was considered a prime job within the Japanese military as MPs had general authority over regular military units,” says Chang.

“They are recruited chiefly from Japanese Foreign Office personnel, and Japanese embassy and consular police overseas. Most Field MPs are officers and warrant officers, and are better paid than regular MPs.

“They may wear civilian clothes or disguises, which, with the necessary identification papers, permit them to move freely among native populations,” says the bulletin.

Scholars usually divide Korea’s colonial period into three eras. The first started in 1910 and ended in 1919, a period in which Japan tried to subdue Koreans by sheer force and terror.

During this period, the Kempei established their notorious reputation, one that stuck until 1945.

The next period lasted until 1931, when Japan tried a softer approach, weeding out the opposition while building a support base among the populace and nurturing collaborators.

The last period lasted until liberation from Japan in 1945.

In essence, Japan employed a blunt strategy of turning the Korean Peninsula into a logistical military base for its war efforts.

Former President Roh Moo-hyun established an ad hoc committee that looked into the checkered past of collaborators.

Among those named as sympathizers were spies for the Kempei.

The Korean War (1950-1953) that followed liberation put the country into such turmoil that collaborators were never really punished.

Many of them retained influential positions unless they stood out dramatically.

When the late President Park Chung Hee normalized ties with Japan in 1965, South Korea received a lump sum as compensation for the misery Japan inflicted on Korea during the colonial period. Even then, the issue of what to do with collaborators was left unresolved.

Park himself received his military education at a Japanese military academy.

Legislation stripping collaborators and their descendants of assets earned during the occupation was not passed until 2005. It has since come into effect. Nevertheless, the descendants have appealed.

The current Namsan Hanok Village was opened in December 1997. Before, the venue housed the headquarters of the Capital Division, a military unit in charge of defending Seoul, which moved to another location in 1989.

But for those who remember, these green slopes will be forever associated with the brutality of the Kempei.