Songs of a nation

Songs of a nation 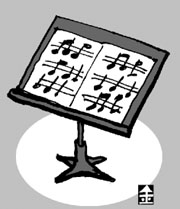 One of the songs highly valued from the enlightenment period in North Korea is “Ruins of Hwangseong.” Composer Jeon Sul-in wrote this song during her tour of Kaesong in 1928, after she saw the ruins of Manwoldae, which was a palace site in Goryeo but now lies ruins with no reminder of past glories. The sad lyric, “As night falls in the Hwangseong ruins, only the moonlight is silent,” brought tears to the eyes of guests at every performance over the reality of losing the country to Japan. Later, the Japanese banned the song, worried that it would expand anti-Japanese emotion.

A book called “A history of Popular Songs During the Nation’sSuffering” in North Korea took “Ruins of Hwangseong” as an example of the sad songs made that reflected the love Koreans felt for their nation under Japanese occupation.

On May 21 on Chosun Central Broadcasting station, an unexpected song, “Port of the Earth,” was performed by the Bocheonbo electronics band. It is a familiar song in Korea and most people will recognize it by just the first verse, “Under the lonely willow leaf/ Traveler tying the horse/ Has the sun gone down?”

This song was a great hit sung by Baek Nyeon-seol and the theme for the movie “Bokjimalli,” made in North Korea in 1940. But it was not highly praised by South Korean song researchers. As assumed by the lyrics, Bokjimalli is a movie about Japan’s ambition to take over the continent and was used to mobilize Korean people in exploiting Manchuria. In the title, “Bokji” implies Manchuria. Another song from this movie reveals this idea more bluntly because the third verse is in Japanese. However, the North Korean press explains that the nation sang Port of the Earth to achieve the nation’s liberalization.

The song can be added to the repertoire of songs that people can sing together when North and South meet. However, the review for this song is totally opposite. We’ll have to see whose review is correct.