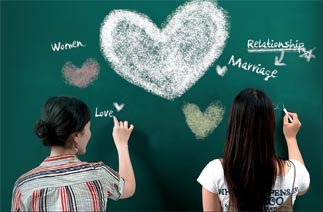 There’s a proverb that says there are three rings in marriage ? the engagement ring, the wedding ring and the suffering.

You know what they say: “Men are from Mars and women are from Venus.”

And when Venusians and Martians get hitched and live under one roof, it’s a safe assumption that things get rough at times.

“Would you be O.K. if your spouse wanted to spend a weekend all by himself or herself?” 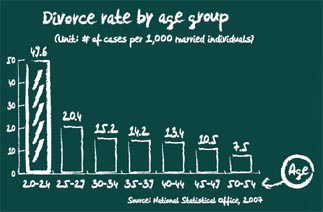 “What would you do if you and your spouse both work, and you were assigned jobs in different cities?”

The questions above are serious debate topics in a course at Sogang University in Seoul in which students engage in heated arguments.

Dubbed “Marriage Preparation,” the three-credit elective course for undergraduates helps students prepare for the bumpy road to a destination called “I do” and the ensuing real-life drama of “happily ever after.”

How well they convey their positions, persuade their partners and find a compromise in tricky situations of virtual wedlock is monitored and graded by Professor Kim Yeong-hee, a counseling professor at the university.

“A majority of young students have fantasies about married life,” Professor Kim said.

“They just have a vague idea that when you love somebody, you get married and live happily after. Only when they face real-life situations do they realize that it’s not all that rosy.”

Some may find it hard to believe that college students are that naive.

But the divorce rate among young couples is rising, which experts attribute to lack of experience and knowledge about love and relationships.

Recent data from the National Statistical Office indicate that the divorce rate among people aged 15 to 24 is about 10 times the rate for other age groups.

A statistics bureau official said young people not ready for marital life find difficult situations awaiting them and as a result, they divorce.

“There are more than 40 factors you must consider when deciding to wed,” said Cha Il-ho, head of the Bangbae Matrimonial Agency.

Cha taught courses on relationships from 2000 to 2007 at Hoseo University in Asan, South Chungcheong.

Other Korean universities have jumped on the bandwagon. Hanyang University has a course titled “Marital Adjustment Education” as a two-credit elective.

“Marriage Preparation” at Sogang University covers pretty much the A to Zs of marriage: communication between men and women, dating and break-ups, marriage and staying single, infidelity and divorce, childbirth and parenting, to name a few.

The curriculum consists mainly of group discussions and presentations.

The course was originally designed for 70 students, but it has been expanded due to high demand.

A total of 101 students are currently registered for the course.

“When I was growing up, my parents fought a lot,” said Kim Si-jin, 27. “What I learned from this course helped me understand them better.”

More than halfway into the semester, there is at least one question that every student ? even the laziest ? tends to ask himself or herself: Do I want to get married? Some may have found answers, others not yet.

“I learned a lot talking to people and conducting surveys,” Lee Byeong-cheol, 25, said after finishing his group’s presentation on “Marriage versus Singledom.”

“I always wanted to get married. It never occurred to me that being single was an option.

“But as I was researching and preparing the presentation, I understood the different choices people make and why they make them.”

According to the Korean Women’s Development Association, one-person households are on the rise in Korea.

One-person households accounted for 38 percent of all households in Germany, 30 percent in Japan and 27 percent in the United States.

“There are things that I would have done differently in my relationship and marriage, had I known better,” professor Kim said.

“As students are thrown questions and experience problems married couples face every day, they learn new things about themselves and about what they want in life. I believe that in itself is a great learning experience,” he added.

Lee said whether you choose marriage or staying single, happiness is not guaranteed.

And neither is unhappiness.