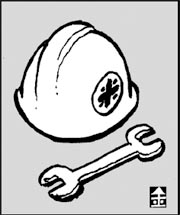 An old friend of mine is a professor in the Department of Natural Science at Seoul National University. He once said, “My idol is not Einstein but a law professor. They look less busy, as long as the Constitution is not radically amended.”

“Up-to-date engineering theories to re-write history” are ceaselessly pouring in. Even engineering professors find it difficult to stay updated on the latest technological developments. A professor should be devoted to attending joint seminars, conferences and academic meetings, and also should give undivided attention to learning the newest theories if he doesn’t want to disgrace himself in public. Against this backdrop, the number of professors, as well as students, who are choosing professions related to the sciences or engineering has been steadily decreasing in Korea.

It seems more difficult to gain lost ground, especially in engineering fields, if mistakes are made. The United States recently decided to build a new nuclear reactor, but it is in a difficult situation because of a lack of human resources. This is because the U.S. has not built a nuclear reactor since the 1979 Three Mile Island nuclear accident. No technicians are available at the moment. The U.S. Westinghouse Corporation asked the Korea Power Engineering Company for technical assistance. Kopec received 30 billion won ($28.6 million) for seed money, and is actively engaged in designing state-of-the-art nuclear reactors with the participation of 50 staff members. The same may be said of Bechtel, America’s greatest builder. It also asked Kopec for assistance as it had no human resources in engineering fields. An official from Kopec said, “I feel strange, as we are re-exporting our design and engineering technologies to a suzerain state.”

We hear the news that many students are avoiding engineering studies. The ratio of engineering students out of the total students nationwide fell from 45.4 percent in 1999 to 35 percent last year. And 73.9 percent of students who received a doctoral degree in the United States decide not to return to Korea. If such a phenomenon persists, it will serve as a trigger to undermine the nation’s long-term competitiveness. It reminds me of the British act preventing skilled technicians from migrating between 1719 and 1825. It was a merciless law designed to stop professional technicians from going abroad. If someone was ordered to return to his country and he did not within six months, he was deprived of all his wealth such as land, assets and civil rights. No country in the world can achieve great things if it gives its engineering students the cold shoulder.

The writer is an editorial writer of the Joong Ang Ilbo.