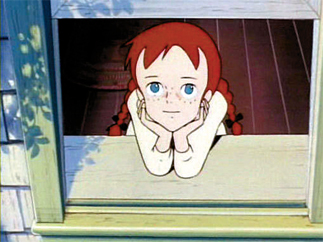 “Anne of Green Gables,” a Japanese TV animation based on the Canadian coming-of-age novel, is back on Korean TV. [JoongAng Ilbo]

It was her. That fruity, perky voice. Those freckles and twinkling eyes. That red, braided hair. Yes, it was Anne Shirley of the Green Gables.

If you are breaking into a smile now, you must be an Anne enthusiast like me, who adored the orphan girl from Lucy Maud Montgomery’s coming-of-age novels. In the late 1980s, Anne enchanted most Korean children in the imported TV animation adaptation, “Red-haired Anne” (1979) directed by noted Japanese animation artists like Hayao Miyazaki and Isao Takahata.

Dubbed in Korean, Anne (who was steadfast in adding an “e” to the end of her name to make it sound more elegant) chattered like a sparrow to Marilla and Matthew, a pair of siblings who adopted her to the peaceful country house in Avonlea on Prince Edward Island.

Watching Anne’s adventures and daydreams for 30 minutes was a religious afterschool must for many children in the 1980s, myself included, of course.

My little sister and I used to sing along to the theme song of the animation and focus on the episode of the day and chat about the story during dinnertime. I don’t have a solid number on audience ratings to mathematically gauge Anne’s popularity, but it’s obvious that Anne is almost an iconic figure to women in their 30s, as seen in the rich number of blogs dedicated to Anne and questions on the Internet on how to watch the series again. Even some of my guy friends remember the episodes where Anne treated a guest with a cake that she made with a liquid painkiller, which she mistook for vanilla extract.

And last Sunday morning, she was magically back on my TV screen, with a casual and habitual click on my humble remote control. I almost cried for joy and hailed her back in my TV world of the 21st century. Anne was back in a rerun of the great, old 1979 TV animation on EBS, the education-focused channel. God bless EBS!

The show was brought back in celebration of the centennial of the 1908 publication of “Anne of Green Gables,” the first novel in the series.

The rerun seems to target former Anne fans who must be watching the series after work by now, as it airs every weekday at 7:30 p.m., with five episodes airing consecutively from 10 a.m. on Sundays. So there I was last Sunday, celebrating a bonanza during careless channel surfing.

I also have to confess that I already have a full DVD collection of the Anne series, to get a dose of Anne whenever I need a trip back to the late 1980s.

I must have been like Bridget Jones singing “All by Myself,” but I didn’t bother to sing along to the theme song like in the old days.

Maybe it is time to graduate from this coming-of-age series, and actually, my sister and I now joke that the Anne series is a girlie fantasy about a poor little orphan girl getting lucky enough to have it all in the end.

She gets pretty when she grows up, wins a scholarship, gets a job that she wants and in the end marries rival-turned-lover Gilbert, a doctor.

Still, I can’t get over the Anne series. What’s so wrong after all about having an anodyne of this little girlie fantasy in this day and age when turning on television is all about fear and controversy?

In Anne’s world, there are no deadly earthquakes, no fear of mad cow disease and no pressure to keep up with the Joneses.

The world still looks livable in that Never land of Anne’s.

This may explain the reason why I can’t wait for Sunday to see Anne daydreaming with her hands resting on her chin.

Come to think about it, my Sunday morning would be perfect, starting with the “Sex and the City” reruns from 8:30 a.m. on cable, then to the Anne of Green Gables series from 10 a.m.

Life can be still beautiful with the TV set, after all!