Performing till they’re blue in the face

Performing till they’re blue in the face 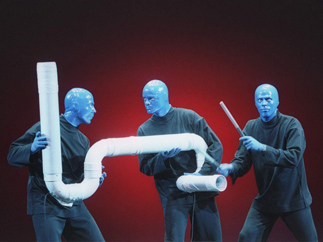 Ever wonder who those three guys with blue faces engaging in bizarre movements for Intel’s Pentium chip commercials were? The playful performers, called Blue Man Group, are finally here for the first time on a Megastar World Tour at the Sejong Center for the Performing Arts from June 10 to June 22.

Blue Man Group was founded by Phil Stanton, Chris Wink and Matt Goldman, who used to work for the same catering company in New York in 1988. The group started performing on the streets and in small clubs. They finally moved on to off-Broadway in 1991 and started to gain worldwide fame.

The show in Seoul follows a simple plot. The three blue-faced men learn overnight how to become mega rock stars through a tutorial manual. The manual appears on a screen telling Blue Man Group how to put on a concert. A voice teaches them mega star moves like “the basic head bop,” or “the one arm fist pump” and “raise the roof.”

The instructions are not only for Blue Man Group but also for the audience. The Blue Man Group says this is not a show where the audience sits back and simply views the performance. The group will keep the audience participating for the entire show. One of the instruments the audience in Korea will see up close will be PVC pipes, some of which are designed to be portable. The pipes make a unique noise with a hint of a synthesizer.

According to Blue Man Group, the blue color painted on the faces of the performers is the same makeup used on any performance stage and there is no secret to it.