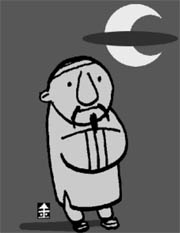 To the vast empire that was China, Ye Lang must have been an insignificant country. It was located in the secluded mountains of what is now China’s Guizhou Province. It was a small country that survived from the Warring States Period (5 B.C.-221 B.C.) to the Han Dynasty, about 300 years. Emperor Wu, who made it his task to expand his empire, sent an envoy there to secure a passage to India.

The following is written in Sima Qian’s “Records of the Grand Historian”: “When the envoy came, Ye Lang’s king asked which was bigger, his country or the Han empire.” The Han empire was then a growing power that had pushed into the countries bordering western China and had suppressed nomadic peoples. It is a passage that makes fun of Ye Lang.

This passage is the origin of the idiom, “Ye Lang claims itself to be big.” The expression was used in famous literary works during the Qing Dynasty and refers to people who claim to be big.

China’s view of itself as a great nation that chides any small country that dares challenge it is offensive.

However, from the perspective of a person living in a small country, the story of Ye Lang makes one think.

What calamity would come about if a country didn’t formulate appropriate policies based on correct understanding of the circumstances?

China has a habit of attaching bad names to its neighboring nations. It uses the word “Mong” ? meaning someone who writes upside down and is thus unable to distinguish the beginning and the end ? when referring to Mongolia. It called Huns “barbarians.”

Ye Lang means “man of night,” a further example of China’s idiosyncratic consciousness. “Man of night” perhaps refers to a person wrapped in darkness who does not possess proper judgment.

The Korean Peninsula, surrounded by four powerful countries, is not one itself. It is perhaps bigger than Ye Lang, but still a small nation. Lacking sufficient natural resources, all it has are dynamic people.

The Korea-U.S. free trade agreement was a strategic choice made from a desire to survive.

The recent conflict that has erupted over U.S. beef imports is shaking the basis of this survival strategy. It is necessary to calmly question the agreement, but we should not shake it.

The politicking that is happening in the streets at night and in the National Assembly makes us worry Korea may be destined for the same fate as Ye Lang, which eventually collapsed because of a silly king.