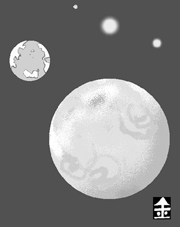 H. G. Wells was an English writer most famous today for his 1898 novel “The War of the Worlds.” It is an early science-fiction novel describing an invasion of Earth by armed aliens from Mars.

Almost a century later, a science-fiction film called “Contact” was released in 1997. The story follows the relentless efforts of the film’s main protagonist, Dr. Eleanor Arroway, played by Jodie Foster, to find evidence of extraterrestrial life by listening for contact via radio waves at the Search for Extraterrestrial Intelligence project center.

She detects a powerful signal composed of prime numbers coming from the star Vega. Eventually, she builds a spacecraft according to the drawings sent by the aliens, and then goes to meet them.

The question of whether aliens actually exist has long stimulated people’s imaginations.

People began to explore space by launching space probes. The Viking 1 and 2 were sent to explore Mars, 78 million kilometers (48.5 million miles) away from Earth, as part of NASA’s Viking program in 1975 and 1976, respectively, in order to find out whether aliens exist there, and transmit data back to Earth.

NASA’s robotic spacecraft Phoenix is currently on a mission at the Martian North Pole and continues to send pictures back to Earth.

Scientists say that Mars could potentially sustain life due to large, frozen lakes. Even though Mars is similar to Earth in terms of distance to the Sun and how long it takes to revolve, it cannot sustain life due to its brutal climate. Mars’ average surface temperature is 53 degrees below zero, far lower than that of the Earth, which is a balmy 13 degrees above.

The Gaia hypothesis of Earth formulated by Dr. James Lovelock proposes that the different elements of our world, such as the atmosphere, land and water, are all joined together to form a complex system.

Dr. Lovelock says the system is able to support life because it tends to maintain a balance of climactic and other conditions through the interaction of its different elements. The main underlying idea is that the Earth is a single organism, and that everything on it is a part of that larger being.

Many people still fear that the Earth’s ecosystem is in serious condition due to global warming.

Unless we take appropriate steps against climate change, we might have to escape from the Earth in a huge spaceship, as shown in the French novelist Bernard Werber’s “Le Papillon des Etoiles.”