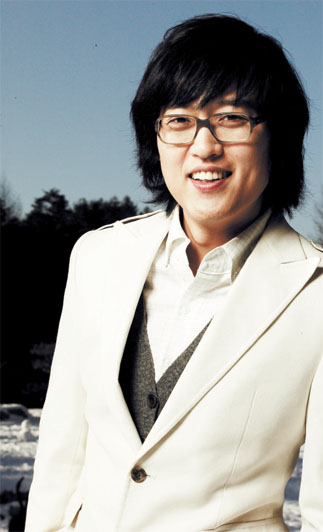 With sentimental melodies and poetic lyrics, his hit songs have long been Korean guys’ favorite as a serenade for their lovers ? or nostalgia for former lovers.

Kim’s deep, soft voice gives girls butterflies in the stomach. And his latest album, released earlier this year, is once again giving that flutter to his fans and sending a ripple through the Korean music industry. Soon sales will the break the 100,000 mark.

After two successful concerts in Goyang and Seongnam of Gyeonggi Province on April 30 and May 25, he is now preparing to perform for fans in Seoul next week (June 13 and 14 at Olympic Park Gymnasium Stadium).

Kim recently gave an interview with the JoongAng Ilbo.

A. I’m very grateful. I consider myself lucky in that I could pursue music without having to make a compromise with popularity. I debuted in the early 1990s when the music industry was doing pretty well. And it wasn’t like I did music for the money. I believe that is why I could stay aloof from the mainstream. It’s the same for my latest album. I just did whatever my heart told me to do. Being detached makes the quality high. And the album came out just like my state of mind: free and easy. It also helped that my genre, ? ballads ? are pretty popular in Korea.

It’s been 15 years since you debuted. Looking back, what set apart your kind of music?

After my band Exhibition (a duo of Kim and Seo Dong-wuk)disbanded in 1998, I was free in terms of the type of music I could pursue. But I couldn’t help but feel the absence of my partner, Dong-wuk. It wasn’t easy deciding everything on my own. Working as a new duo with Lee Jeok, we experimented a lot.

We tried things that a soloist wouldn’t have the heart to try on his own. We were pretty confident then. When I studied at Berklee College of Music in 1999, I realized how limited my musical sphere had been. I was very disturbed. But then I realized that the music I’d made until then wasn’t worthless at all. That is how my third album came about.

How do you compose lyrics?

I empathize. I even beat myself up to create a mood in which desperate words can come out. I drink. I smoke. I do not have the capabilities to write heartbreaking songs in smiles and coziness.

Where do you usually find inspiration?

I first make a song in my head. If I use a piano, I know my fingers will only play familiar notes. But If I compose in my head, I play chords that I’ve never heard of, that I could never otherwise play. It’s like a dream. I guess I can say I bring out music from my dreams.

Your concerts have been a huge success.

I think it’s because I don’t perform often. Some say my concert is like the World Cup because I perform every four years. I think people like the orchestra feel of my performance. The Goyang and Seongnam concerts had a 24-member orchestra, and the upcoming concerts in Seoul will feature an orchestra twice as large. I’ll be singing more hit songs. The arrangements will be more colorful.

What influences your meticulousness in concert planning, well known in the industry?

I check the music of the orchestra myself. I’ve been working like that since I worked with the London Symphony Orchestra on my previous albums.