A dictionary that wouldn’t die

A dictionary that wouldn’t die 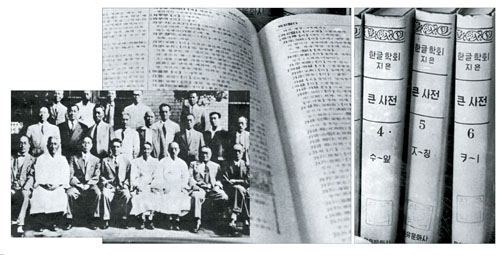 The sixth and final volume of the“Extensive Dictionary of the Joseon Language,” right, was completed on Oct. 9, 1957; a 1946 photo of scholars who survived imprisonment and torture, below. [JoongAng Ilbo]

A worker dug out a pile of dust-covered manuscripts from a warehouse in Gyeongseong Station (now Seoul Station). They were abandoned with other freight when the Japanese left Korea after exiting World War II. Little did this worker know that he had just made a historic discovery linked to the development of the Korean language.

At more than 26,500 pages, the stack was as tall as an average adult. They were the very first draft of “The Extensive Dictionary of the Joseon Language,” the 13-year effort of more than 100 determined scholars who risked their lives for its sake.

Released after three years of imprisonment, trials and torture at the hands of the Japanese, the scholars looked everywhere to find the draft, which had been confiscated upon their arrest. More than two weeks passed, and some had given up hope of ever finding it. That is, until an unexpected phone call came from the Gyeongseong Station official.

The saga goes back 16 years. A group of 108 scholars organized the Joseon Language Dictionary Committee in 1929. They believed a comprehensive, unified spelling system for the Korean language was long overdue.

“The dictionaries compiled so far are only for foreigners who want to learn the Korean language,” Lee Eun-sang (1903-1982), a member of the committee wrote in the prospectus. “It is pivotal that we compile a unified system of our language, which is the basic element of a culture, and the best way to do that is to compile a comprehensive dictionary.”

Other members included Lee Geuk-no, Lee Wu-sik and Kim Yang-su. Most of the members were influenced by Ju Si-kyeong (1876-1914), a leading Korean language scholar of that time. Ju was at the forefront of the enlightenment movement and other campaigns aimed at promoting the use and research of the Korean language. 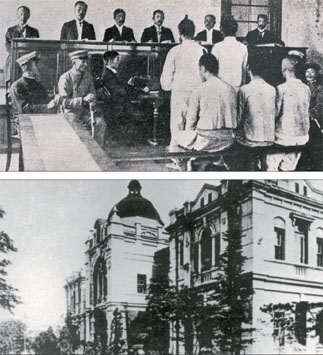 A stone marker in Hwadong, Jongno indicates where the scholars used to work. By Kim Hyung-eun

But the timing and circumstances couldn’t have been worse. The Joseon Dynasty (1392-1910) had fallen to Japanese forces, and oppression was getting fiercer by the day as the invaders rooted out all things Korean.

But this did little to break the scholars’ spirits. If anything, they believed a well-grounded and systemized language system was more important than ever. The committee reassembled as the Joseon Language Institute in 1931, publishing the Unified Orthography System in 1933 and Collection of Standard Terms in Joseon Language in 1936.


“That they organized such a massive group to compile a dictionary indicates the importance of language to a nationalist movement,” explained Yu Ho-seon, the history curator of the National Museum of Korea. “When you examine the previous activities of the committee members, you realize that it wasn’t just about making the dictionary, but more about regaining the nation’s independence.”

Despite limited funds and strict surveillance by the Japanese, the scholars persisted in their work. By the fall of 1942, they had almost completed the first draft of their envisioned dictionary, which contained 160,000 words with 5,000 others to be annotated. But on Oct. 1, their fate took a tragic turn. In the so-called Joseon Language Institute Incident, 33 scholars were arrested.

Experts categorize the history of the Korean language by what occurred before and after that day. The incident began when a high school student, Park Yeong-hee, was caught by the Japanese police speaking Korean on a train. This led to the summoning of Park’s teacher, Jeong Tae-jin, who was a member of the Joseon Language Institute.

“For the Japanese, it was the perfect opportunity to seize Korean intellectuals all at once,” Yu said.

The Japanese wasted no time in doing just that. They apprehended most of the scholars, disbanded the institute and confiscated all of their materials. 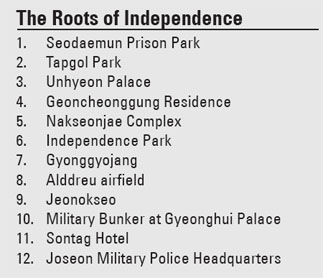 After independence from Japan, Korean newspapers reported the brutal torture the scholars underwent. They were beaten till they fainted, and even forced to beat one another. Two of the Joseon Language Institute members, Lee Yun-jae and Han Jing, died in jail in 1943 and 1944, respectively.

In fact, the incident was a foreseeable disaster. The Japanese authorities had abolished Joseon language classes in schools in 1938, and Koreans were forced to use Japanese in their daily lives from that point on. In 1940, they made Koreans adopt Japanese names. The same year, authorities banned the publication of two Korean daily newspapers, the Chosun and the Dong-A.

Following independence and the discovery of the first draft, Lee Geuk-no and others went to Eulyoo Publishing Company with the dictionary.

“We turned down their request several times,” Choung Chin-sook, the CEO of the publisher, recalled. “We knew it would be extremely hard to find the paper to publish the dictionary. And even if we did find paper, we knew it would be difficult to collect payment for our work.”

Lee eventually convinced the publisher, and that is how the first official, extensive dictionary made by Korean hands came into being.

The publisher ran out of paper and money after the publication of the first volume. But unexpected help was on the way. The Rockefeller Foundation in the United States heard the story of the dictionary through a U.S. captain and sent the materials needed to print subsequent volumes. By June 1, 1950, the third volume was published.

“The scholars made round-the-clock copies for a month [during the war],” Yu said. “Then they put them in a large jar and buried them in their backyards so that they wouldn’t be burned.”

Finally in 1957, 10 years after the publication of the first volume, the sixth and final volume of the dictionary was published, ending three decades of heartbreaking struggle to preserve the Korean language.

“The most vicious and reckless atrocity the Japanese committed against the Korean people was trying to deprive us of our language,” said Lee Oh-young, an honorary professor at Ewha Womans University and a JoongAng Ilbo adviser. “There is no 20th-century weapon powerful enough to destroy one’s language. The Joseon Language Institute Incident is the proof of that.”

The Joseon Language Institute was renamed the Korean Language Research Society in 1949. Since then it has continued to preserve and promote the Korean language by publishing more dictionaries and school textbooks.

But not much has been done to preserve the place where so much history took place. It was only last year that the Seoul government set up a stone marker in Jongno where the scholars used to work. The building is now being used for a Won Buddhism gathering. The society was aware of neither the presence of the stone marker, nor the current function of the building.

Yoo Un-sang, director of the society, acknowledged that little is known about the site. Yoo said it is currently working on a “Hangul Culture Map” that will mark around 100 historic sites across the country connected to the development of Hangul. The map is expected to be completed within two years.