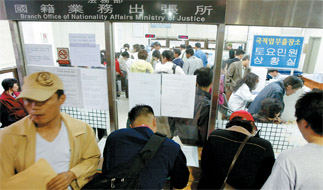 In 2005, a change to the nationality law triggered an exodus to the immigration office as thousands chose to drop their South Korean citizenship. [JoongAng Ilbo]

The Lee Myung-bak administration wants to amend the nationality law to allow dual citizenship in order to keep talented Koreans here and to attract people to settle in Korea.

In a recent meeting of a committee given the job of raising the country’s global competitiveness, Choo Kyu-ho, the commissioner of the Justice Ministry’s Korea Immigration Service, said the ministry will amend current laws by November and submit a revision bill to the National Assembly for approval.

Choo says a public hearing is scheduled for July to gauge public opinion.

“We did our own preliminary research on the subject that indicates the public is leaning positively on the issue,” the commissioner said.

The amendments may be a hard sell to the public, even if the administration’s intentions are good.

Along with being conservative and business-friendly, the Lee administration is largely regarded as representing the upper-income bracket. When cabinet members, Blue House chief secretaries and aides recently disclosed their assets, opposition parties and civic groups had a field day, dubbing the Lee administration a group of elitist snobs. 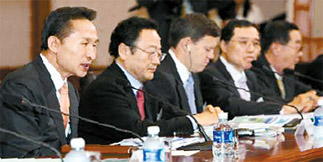 A recent meeting led by President Lee Myung-bak, left, on increasing Korea’s global competitiveness. The administration is considering amending nationality law to allow dual citizenship. It is a necessary step, officials say, to keep talented people in the country and to attract foreigners to South Korea. [JoongAng Ilbo]

When the officials’ assets were released, the average assets of the 10 chief secretaries was 35 billion won ($3.3 million), while those of 16 cabinet members stood at 32.5 billion won. On average, the 34 lower-ranking Blue House aides had assets worth 17 billion won, according to the Government Public Workers Ethics Committee.

During the Roh Moo-hyun administration, the average asset value of the 10 chief secretaries was about 13 billion won.

That nominees for cabinet posts and one chief presidential secretary had to resign over suspicions regarding their wealth and alleged misconduct has not helped, either.

Even President Lee admitted in a meeting with aides last month that his administration has projected a public image that only wealthy people work at the Blue House.

In a country where mandatory military service is associated with draft dodgers - often sons of the rich and powerful - the granting of dual citizenship is a sensitive subject.

Well aware of the consequences that a wrong move could bring, Choo Kyu-ho says that eligible foreign males who want to claim dual citizenship in their home country and in South Korea must meet the precondition of completing mandatory military service here.

The July public hearing will also be used to evaluate the demand, if any, for South Korean citizenship.

The numbers may not favor the proposed amendment. In the past decade, 171,000 South Koreans switched their citizenship to another country or dropped South Korean citizenship. In the same period, only 62,500 people obtained South Korean nationality or recovered it, according to the Justice Ministry.

Some experts think changes to the nationality law will be hard to accept.

“People think that many of those who have dual citizenship or those who could obtain it are rich people who can afford to go abroad,” said Cheon Sang-jin, a professor of sociology at Sogang University.

“Given the current public sentiment, I would say the odds are very long. Some would probably look suspiciously at the whole idea, thinking it’s a plot by the Lee administration to cater to the rich instead of viewing it as a pure policy move for the good of the country,” Cheon said.

In some cases, frequently reported, some parents travel to the United States to give birth in order to obtain U.S. citizenship for their children.

In 2005, a change in the nationality law triggered an exodus of thousands to the immigration office as people chose to drop their South Korean citizenship.

When the bill passed, the Immigration Bureau’s Seoul office, which typically handled a few dozen cases per month, was swamped with applications. People were trying to beat the date when those with dual citizenship would be prohibited from renouncing their Korean citizenship until after fulfilling their military duty.

Grand National Party lawmaker Hong Jun-pyo, recently elected floor leader of his party, introduced the bill. As floor leader, he is responsible for building a bridge of cooperation between the Blue House and the ruling party.

If mishandled, the issue could worsen President Lee’s sliding approval rates. Citing the sensitivity of the issue, Hong declined comment.

The administration envisions that it can calm critics by allowing, in the case of males, dual citizenship only to those who have completed their mandatory military service.

Nonetheless, the appeal of such an approach is unclear.

“It’s hard for me to see myself going to the military to obtain South Korean citizenship,” said a 29-year-old Korean-American working for a foreign company here who requested anonymity. “I think lots of my friends in a similar position would agree with me. It would be nice to have dual citizenship, but the military service is a huge obstacle.”

Currently, eligible men serve a typical two-year tour in the military. The length of service varies slightly depending on the military branch.

An official of the Justice Ministry, speaking on condition of anonymity, said that once dual citizenship is allowed, the government may seek to relax the conditions incrementally.

“We are not talking about millions of people here,” the official said.

“It’s probably only a handful. I think we should make exceptions for them.”

When it comes to military service, public reaction in South Korea cannot be underestimated.

In 2002, Yoo Seung-jun, a dual citizenship holder and popular pop singer at the time, was banned from entering the country after the singer quietly dropped South Korean citizenship and left the country to obtain U.S. citizenship, despite public pledges that he would render mandatory military service.

If the military issue is resolved, other matters will need to be addressed, including what to do about taxation, voting rights, social benefits such as pensions and jurisdiction of criminal cases.

Seok Dong-hyeon, a prosecutor for the Seoul District Court, said that any amendments to the nationality law should be done in consideration of overseas Koreans as well.

“There are many Koreans who hesitate to drop South Korean citizenship and remain foreigners in a foreign country despite having lived there for decades,” Seok said.

“They should be able to maintain South Korean citizenship while obtaining citizenship in the country where they chose to live so they can get the benefits as full citizens of that country.”

Kim Young-geun, an official at the Justice Ministry, said is hard to know the exact number of those who have dual citizenship but choose not to tell the government.

As of April, only 42,000 people, all under 22, have registered as having dual citizenship. Of those, 23,000 have citizenship here and in the United States.

“Unless people voluntarily tell the government they have obtained another country’s citizenship, there is no way to know how many are out there,” Kim said.

In coming months, public hearings and heated debates in the National Assembly are expected over the issue.

Meanwhile, Lee Cheol-woo, a law professor at Yonsei University who did a study on dual citizenship for the Justice Ministry, pointed out a fundamental point in the issue.

“To many who would consider obtaining South Korean citizenship, the most important thing will be how good Korea is for foreigners to live, because they will look for some form of comfort level,” Lee said.

The professor said that the Lee administration, in trying to persuade the public of changes to nationality law, should take a broad, inclusive approach. Lee said that the concept will work better than trying to pitch the idea as a recruiting tool strictly to help talented people.

“I would lay out the benefits that people like adopted Koreans, ethnic Koreans living abroad and the children of international marriages could get,” Lee Cheol-woo said.