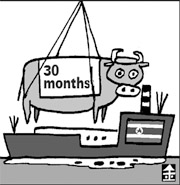 American agronomist Norman Borlaug succeeded in creating a high-yield, small wheat plant called “Sonora” by mixing the genes of dwarf wheat and American wheat. Traditionally American wheat crops yielded less than 300 kilograms per ten hectares, while Sonora’s crop yield exceeded more than 1,409 kilograms. Thanks to “Sonora,” global crop production increased by 250 percent from 1950 to 1984. During the same period, world population doubled from 2.5 billion, and average life expectancy increased by 15 years. The number of people living in the least developed countries who suffered from hunger fell from 35 percent to 19 percent. Borlaug was awarded the 1970 Nobel Peace Prize for his excellent work, which launched the “Green Revolution.”

He visited Korea last April. Borlaug refuted environmental ideologists’ arguments, saying, “6.5 billion people live on earth. If farmers use only organic fertilizers and organic agricultural methods in their farm lands worldwide, then they can feed only 4 billion people. Then, should the rest of the people, 2.5 billion people, die?” He criticized radical environmentalists who are preventing poor farmers in Africa and Southeast Asia from using genetically modified seeds, chemical fertilizers and agrichemicals. He also asked, “They urge people to be seized with fear against genetically modified foods, letting millions of children in developing countries live at risk of poverty and disease. Is it the right thing to do?”

The whole nation is thrown into an uproar due to fears of mad cow disease. The probability of catching mad cow disease is one in 4.5 billion. However, students are continuing candlelight protests. Protesters carry placards about dying people, and urge the government to provide food aid to the North. We continue to hear news that North Koreans are starving to death. Then why don’t we donate the U.S. beef from cattle aged 30 months or older to North Korea?

North Korea had asked Germany and Switzerland for 400,000 cows scheduled for destruction as grant-in-aid. At that time 453 cows in Switzerland and 312 cows in Germany were found to have caught mad cow disease. To the Swiss government, it is better to eat beef than starve to death, even if it is rather dangerous. After due consideration, the two countries were known to have provided a considerable amount of beef to North Korea. Only three American cows were found with mad cow disease. It is time to calm down and seek a new way to help North Korean people.

Dr. Borlaug said, “The most basic human right is the right not to starve to death.”