A scene from “Robot Taekwon V,” a live-action film based on the 1976 film of the same name. Provided by Shin Cine Communications

One image captured the mind of William Teitler, a Hollywood producer known for his work on “Jumanji” (1995) and “The Polar Express” (2004).

That image was of a 60-meter tall robot ? and in his mind, Teitler was controlling it.

“It’s a delightful fantasy just picturing the scene,” he said.

Teitler, 57, is the executive producer of the Korean live-action film, “Robot Taekwon V,” which starts shooting in September. 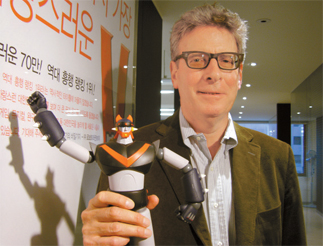 It will be released sometime next year.

As the film’s co-producer, Teitler visited Korea last week to meet with Shin Chul, the head of film company Shin Cine Communications; Chonggi Kim, the director of the 1976 version; and Won.

They discussed the upcoming film’s story and the use of computer graphics with seven local visual effects studios.

According to Robot Taekwon V Company, which is in charge of the filmmaking, this is the first time that a Hollywood producer has taken part in a purely Korean movie.

The modern-day Robot Taekwon V is the sequel to the 1970s animated science-fiction classic.

It is based on the Internet comic strip once serialized on the portal site Daum.

Kim Hoon, who played the 10-year-old protagonist in the original production, is now in his mid-40s.

Kim, a veteran taekwondo athlete, is the son of Dr. Cops, a rebellious and evil scientist.

To exact revenge on a world that has mocked him, Dr. Cops creates an army of giant robots to conquer the world. He gets help from his son, who controls the robots.

The cartoon was a big hit during the 1970s and produced many sequels.

“Though I’m not familiar with Korean culture, the story was very amusing,” Teitler said.

“The scenario of Dr. Cops being mistreated by his co-workers and ignored at home and expressing emotion through a robot was unique.”

Teitler added that across different cultures, most people yearn for the best moments of life.

“There’s an emotional touchstone in the story that everyone can respond to,” he said.

How did Teitler get involved with the Korean robot story?

The producer is a close friend of Shin, the head of the production company.

Six years ago, the two worked together on the “Bruce Lee Project,” a restoration effort of films starring martial arts actor Bruce Lee (1940-1973) through computer graphics.

“One day, Shin talked about the overall story and concept of Robot Taekwon V,” Teitler said. “He wanted to aim it at the local film market.”

Teitler thought the story could be successful not only in the local market, but also in the West.

He got more enthused about the project after reading the comic strips online.

Teitler told Shin that Robot Taekwon V should be not restricted to local release but expanded globally.

The producer is confident about the content. He compares it to Hollywood blockbusters like Michael Bay’s live-action film, “Transformers” (2007) and Stan Lee’s “Iron Man” (2008).

While Transformers tells the story of shape-shifting robots and Iron Man of a superhero, Robot Taekwon V deals with an emotional bond between robots and humans.

The production cost of the upcoming film is estimated at 20 billion won ($19.6 million). That budget “is not much compared to other Hollywood science-fiction films,” Teitler said.

But Teitler is worried about charming modern-day moviegoers, who are used to mind-boggling special effects. He questions how many youngsters will appreciate Robot Taekwon V. “That’s what I’m most concerned about,” he said.

In the end, he knows it’s not about money. He hopes that content, story and character will win in the end and make the film work.