News, entertainment and a drop of sarcasm

News, entertainment and a drop of sarcasm 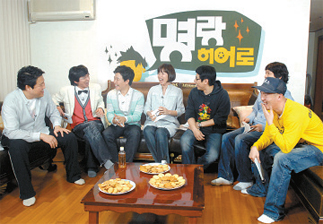 A scene from “A Merry and Happy Hero,” a news-meets-entertainment talk show. [MBC-TV]

In this day and age when schoolgirls, mothers with baby carriages and college students are out on the street to make a political statement with candles, even in the pouring rain, entertainment on television cannot entirely escape current news and controversies. A talk show like “A Merry and Happy Hero” on MBC-TV is no exception, as it actively engages in discussing political and social issues, despite being categorized as an entertainment show.

Airing at 11:45 p.m. on Saturdays, the show is an interesting mutation in the history of Korean talk shows, as it features comedians and other TV personalities of various backgrounds, who ramble on about everything from mad cow disease to the president to lawmakers.

Instead of rescuing viewers from their fatigue with reality, this talk show plunges deep into reality and gives it a twist, provoking sarcasm and eliciting laughter.

There are no rules and no limits. Politicians and public servants, the president included, are fine objects of ridicule, as the panel members choose a piece of controversial news each week to discuss.

An important chance for this relatively new talk show to gain the spotlight was its feature on the U.S. beef import controversy. One of the panel members, Lee Ha-neul, a rapper, sneered at the Korean government, saying, “Government officials seemed to have been half asleep in negotiations with their U.S. counterparts. They were just too tired because they had to follow the early bird lifestyle of President [Lee Myung-bak].”

In the latest episode, another panel member, Kim Gu-ra, a comedian noted for having a spiteful tongue, nailed down a guest of the week for supporting President Lee during his campaign last year.

Kim is not a spokesperson for an opposition party, and Lee is not a professional news commentator. They are acting as genuine representatives of public viewers, they don’t use political or economic jargon, and they are honest about their ignorance of certain issues.

They sometimes come up with absurd opinions, like in a recent episode where they discussed a fun little news article about why there are so many lawmakers who doze off in the National Assembly.

As a way to literally awaken the lawmakers, panel members discussed ideas like “having half-naked models stand around the assembly speaker” and “slapping the lawmakers with slippers.” Their wild, silly and sometimes outrageous remarks aim for laughs, but it’s a kind of laughter that leaves a certain discomforting reminder of reality. Viewers can choose to either agree or disagree in this news-meets-entertainment talk show.

Indeed, a crucial element of the show is its panel members and their chemistry. Both a catch and a charm of the show is that the panel members are far from your standard political commentators. Lee, the rapper, for example, is known for his violent accidents in the past, and Kim, the comedian, carries a reputation for his abusive language.

Other panel members all carry their disgraced past, as Shin Jeong-hwan, a singer and comedian, was caught in an illegal gambling scandal, and Kim Guk-jin, a comedian, hit rock bottom in his career after an addiction to golf. A virtue of the show, however, lies in the fact that the panel members do not wrap themselves in a pretty package and speak openly about each other. By doing so, the show presents a raw kind of entertainment, unlike all-too-serious debate shows where the audience dozes off in the back rows.

Still, it remains to be seen whether the show will be able to keep its charm for a long time. Chitchatting over controversies and coming up with silly answers might get old quickly. Instead of remaining at the observer level, it would be better if the panel would have the courage to invite the politicians or public servants into their studio and confront them in person.

After all, we live in a world where it is hard for anyone to remain silent.