It’s a hard-knock life for us

It’s a hard-knock life for us 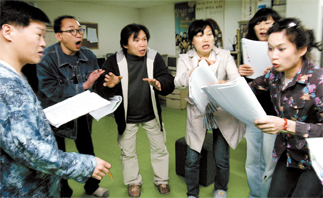 Producer Kim Soon-young, far left, and the actors of Miyeon rehearse for their play “Hero.” All photos by Jeong Chi-ho

The voices are so loud you can hear them yelling as soon as you arrive at the entrance to the building.
Walking past the hall corridor, a group of actors, who are the members of the theater troupe Miyeon, are gathered in their rehearsal room to practice their lines for an upcoming play called “Hero.”

The work celebrates the troupe’s 10th anniversary, and was staged during the Seoul Theater Festival last month. Among the actors in the play are familiar faces like veteran theater actor Oh Hyeon-gyeong and Kim In-tae.

But the life they endure isn’t always easy. In fact, being an actor in Korea often is a hard life, a fact that’s remained constant since the birth of Korean theater.
This year marks the 100th anniversary of Korean theater. The first Korean play was staged in 1908. It was a piece by playwright Lee In-jik, who also wrote “Silver World.”

Times have changed since then, but the poor working conditions of local actors keep them in a hardscrabble existence. They constantly face low wages.

In 2005, major figures of local theaters pleaded with the National Assembly to support the industry. Their demand was simple. They didn’t want to worry about eating three meals a day, the players told the political authorities.
On a recent weekday, two actors exchanged a casual greeting.


“Did you pay rent?” the senior actor asked his colleague.

“Yes, did you?” replied the junior.

In reality, the actors, crew and most producers in Korean theater are not guaranteed a basic standard of living. Staging a single play typically costs 40 million won to 50 million won ($39,080 to $48,850). A profit is never guaranteed.

The actors of “Hero” rehearsed 83 days for their performance.

Most actors spend three months in preparation. For crew and producers, a play requires five months of work, including casting and the selection of a play.
“If this play hits it big, we should be able to give Kim Ki-tae, the youngest actor in the troupe, about 500,000 won,” says the assistant producer of Miyeon. That turns out to be 160,000 won a month. 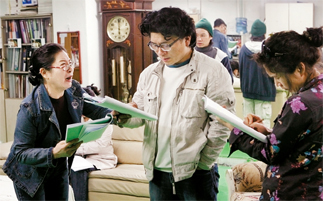 Yoo Gyeong-min, center, an assistant producer of Miyeon, reads with the actors.


Kim, who overheard the assistant producer talk, is delighted to hear the news.

He says, “That’s not so bad compared to other troupes.”

Kim has to cobble together part-time jobs to make a living when he has no acting work. He pays rent and subway fees with the earnings, but at times he is broke. He occasionally walks home from the studio when this happens. Building up savings is unimaginable.

Yu Gyeong-min, an assistant producer for Hero, majored in theater in graduate school. He’s an elite in the field, but his extra income comes from elsewhere.
He majored in architecture in his undergraduate studies, and he works in a design studio.

He saves the money from the studio to help fund his plays.

“At least I don’t have to worry about making a living, but it’s still a hard life,” Yu says. “I spend most of my savings, but I have no regrets. I just feel bad that I can’t pay the actors.”

Theater folk aren’t the only people in the arts involved in a labor of love.

They are not regular workers, either. When there is no play, they are simply out of work. Despite the hardships, most people said they want to stay in the business.

Kim Gyeong-su left his hometown and came to Seoul to become an actor. He joined Miyeon three months ago. Unfortunately, he couldn’t get the lead role in the upcoming play. He is now helping the crew set up the stage.
“I came, because I wanted to become a play actor,” Kim Gyeong-su says. “What other reason could there be? I knew I could do this well. I have no regrets.”
Kim Ki-tae, the youngest actor in the troupe, understands his colleague’s unyielding passion.

“I’ve seen a few people who left the industry to get a normal job, but after about a year, they mostly come back,” he says.
He said the rewarding feeling he gets from acting can’t compare with anything else. Hero is a story about ordinary people and their heroic deeds in everyday life.
In another century, perhaps these actors will be the heroes of Korean theater. 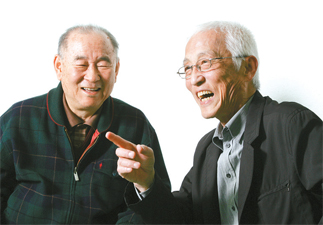 Veteran actors like Oh Hyeon-gyeong and Kim In-tae say that actors should think hard about how to survive in the industry and improve their working conditions.

Korean theater has celebrated 100 years. How do you feel?

Oh: I started my career as a student, and spent my entire life on stage. It’s been 50 years. Time flies if I think of all the colleagues and the work I’ve done.

Kim: I have no special feeling. We opened new troupes, and closed down other troupes. Those phases were repeated over and over all these years, and now here we are.

Would you say that the condition of Korean theater has improved?

Kim: We have more stages, more performances and actors, but we are losing the sincerity of a play. In the past we lacked many skills, but we had genuine passion. We burned with passion even if it meant our parents disapproved of what we did.

Oh: It gets hard now and then. The actors have more talent than before, but some think anyone can become an actor. The basic training is important. It’s frustrating to see actors relying on skills over basic training.

Why does theater suffer more than other genres of art?

Oh: There is no popular appeal to it. More talented actors leave the industry, and the quality is lagging. It’s a vicious cycle.

Kim: I feel the same. The systematic foundation should be stronger in order for us to avoid the label of “starving artists.”

Yu In-chon, the current Minister of Culture and Tourism, said he will fund Korean theater even if it means he’ll have to spend his own personal savings.

Oh: His mindset is important for funding the industry. We have lots of support already, but the actors don’t benefit from it.

Kim: It’s good that he will fund the industry, but the distribution shouldn’t be biased like it often is.

Oh: Some troupes take advantage of funding policies within an institutional system. We’ve been around the industry for a long time, but sometimes we see people who call themselves “a theater figure” who actually aren’t helping the industry. This is a problem.

Is there a way for actors to be treated fairly?

Kim: We haven’t created the right atmosphere for theater to grow. We have to think first about why the quality is falling behind.

Oh: Audiences should be able to tell a good play from a bad one. That’s the way to support Korean plays. That’s the only way for actors to be treated fairly.