Comic musical lights up the stage in ‘Eurobeat’

Comic musical lights up the stage in ‘Eurobeat’ 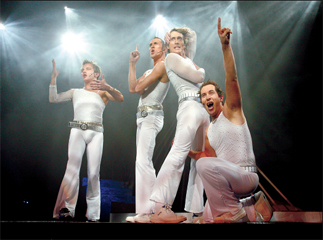 A scene from Eurobeat Provided by Seoul Musical

The ’80s disco beat made history when John Travolta in a white suit shook the floor under a rotating disco ball and strolled down the street to tunes by the Bee Gees.

It may not be the same, but a musical offering similar excitement and sensation that is so ’80s is here to entertain audiences in Seoul.

The original members of the musical “Eurobeat: Almost Eurovision,” are in Seoul from June 25 through July 6 at Kepco Art Center.

The Eurobeat synopsis is simple. It is about a European music contest where contestants from 10 teams from different parts of Europe compete against each other in Sarajevo.

Eurobeat is modeled after the Eurovision song contest, which first aired in 1956 and has produced many world-famous artists such as ABBA in 1974 and Celine Dion in 1988.

What this musical does to differentiate itself from other conventional musicals is that it asks for audience participation.

Eurobeat is more than a musical as it’s a combination of hip dance beats, pop culture and humor. Even some of the names of the contestants are hilarious.

There’s Versuvia Versace from Italy, Toomas Jerker and the Stone-Hard Boys from Estonia and the KG Boyz from Russia.

In one act, women in the audience are asked to brace themselves as the male performers will be taking off their shirts to reveal their muscular bodies.

In another humourous twist, Persephone of Greece, after attracting male audience members with her sexy moves, leaves the stage wearing thick-rimmed glasses with dull lenses.

The production company for Eurobeat is Glynn Nicholas Group, an Australian company founded in 2004.

Glynn Nicholas, who produced the musical, is a famous Australian comedian.

The production company is known for comedic performances including “Certified Male” as well as “Yummy Opera.”