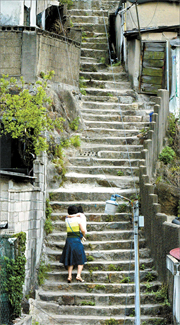 When times get tough, working class folks often feel it the most.
Consider a few examples.
Lee Sun-woo, 38, runs a home interior business and is the father of twins In-woo and Seo-won. The twins have suffered from numerous disabilities, including respiratory problems, since their birth in 2005. The children have been categorized as Grade 1 in their disabilities, which is the highest.
The father says the children and their mother visit several hospitals every week, including the Seoul National University hospital.
Although he didn’t go into detail on how much he makes a month, Lee said the family spends a lot on medical bills, which are approximately three to four times more than he earns. Lee had to lay off some of his employees because he couldn’t afford to pay them. 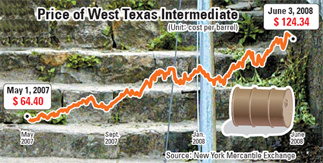 Currently, the Lees receive government support for their medical bills, which takes a load off their shoulders.
Lee also gets help from other organizations, including Knewlife (www.knewlife.com), a welfare organization that helps families with children born with disabilities or incurable diseases.

Despite the help, Lee is concerned about recent developments in the economy, including rising crude oil and consumer prices.
“With what’s happening in the economy, our family will probably have to tighten our already frugal living expanses,” Lee said.

Im Hyuk-gi, 64, a cab driver in Seoul, has been driving the roads for 40 years. Im knows cab drivers who are giving up their vehicles because they can’t afford to work with the rising gas prices.

“I’m one of the few lucky ones because I drive a car that runs on LPG [liquefied petroleum gas], but it is still expensive to drive around town,” the cab driver said.

Park Ho-young, 33, recently had his second child. “Currently my wife and I work and we have been using a stay-at-home babysitter, who receives 1.5 million won a month,” said Park.

“With living expenses going up and basic apartment needs like electricity, water and gas prices likely to go up later this year, I don’t think I can afford a babysitter,” Park said.

“Life is already hard on us and I guess it may be harder for people who have it worse than some people.”

The new Lee Myung-bak administration recently has been struggling to keep campaign promises made during last year’s presidential race.

Money problems always ebb and flow, but there seems to be sort of a perfect storm of financial chaos now. The worldwide economic slowdown and skyrocketing oil prices have hit as the Korean economy has been stumbling.

As a result, consumer prices have been reaching new highs. It is a situation that will test the administration’s ability.

Average people in Korea like Lee and Im are feeling the heat and tightening their belts.

More worry about government plans to privatize public services like gas, transportation and electricity in the second half of 2008, a move some feel will increase hardship on average people.

According to reports by the Samsung Economic Research Institute, Korea’s consumer price rate is expected to rise to 3.8 percent in the second half of the year, triggered by high oil prices and rising raw material costs.

Meanwhile, the nation’s economic growth in the second half of the year is projected at 3.8 percent, well under the 5.5 percent growth rate expected in the first six months of this year.

This bad news eventually ripples to consumer prices that hit average people in the wallet.

According to the National Statistical Office, consumer prices in May were 4.9 percent higher than last year. It is the highest spike in the last five years.
Among foodstuffs, pork jumped 24.7 percent from 2007, while rice, a staple in the Korean diet, went up 4.2 percent. Flour surged 66 percent. Among oil products, gasoline increased 16.3 percent while light oil jumped 40 percent.

Experts say those most effected by the negative economy are the low-income class.

“Already people are cutting back on basic expenses and this will continue to escalate as consumer prices go up,” said Kwon Soon-woo, a researcher at SERI.

“Because high crude oil prices trigger rising consumer prices, it won’t be easy for the government to find measures to turn things around,” Kwon added.

The researcher said the government will have to come up with measures that stimulate the economy quickly to protect the lower-income class from the deepening economic turmoil.

A middle-aged woman who lives in Guryong Village, an infamous ghetto located behind the prosperous Gangnam neighborhood, expressed her frustration. “What’s the point of talking to the media when there’s no benefit or change taking place- All that is left is pain and humiliation. Things are going to be the same or even worse.”

There are 1.5 million people who receive monthly government funding for basic living expanses, according to the Ministry for Health, Welfare and Family Affairs. The number has been climbing from 1.3 million in 2002.

“These are the people who will be hardest hit by current developments,” said Kwon.

Kim Gene-uhc, a professor at Konkuk University and a member of the Korean Social Security Association, recently published research indicating that the current economic problems that threaten the daily lives of the working class have been coming for a long time.

Kim also suggests that the government needs to revise the electricity and water bill system with discounts so those at the poverty level can survive.

Not all are worried about the future. Park Jong-eui, a cab driver in Seoul, said basic living expenses should rise. “For a long time the Korean people have enjoyed cheap rates for utilities,” Park said.

“It’s about time that people pay for the services they receive. It is not the government’s fault that consumer prices are going up. It’s the international factor, so what can the government do?”

Park said people must make do and that there is no such thing as a free lunch.

“Young people today want everything for free. They need to work for it and work hard. That’s the way to live.”