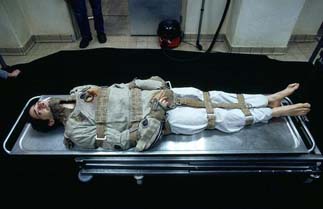 Starks (Adrien Brody) is tightly restrained in a jacket.

To be honest, I’m not a big fan of sci-fi movies, especially those with gory scenes and disgusting scars that make me feel queasy after watching them.

Well, “The Jacket” has all the elements to make me go “eww,” but for some reason, I didn’t hate this quiet and extremely morose movie. Perhaps Brian Eno’s depressing music put me in the right mood.

Oscar-winner Adrien Brody stars as Jack Starks, a retired soldier who was shot in the head while fighting in the first Gulf War. On his way home, he gets caught in an incident that puts him into another terrifying scenario ? convicted of a murder he didn’t commit.

Sent to a psychiatric hospital for the criminally insane, Starks is drugged by the evil Dr. Becker (Kris Kristofferson) who likes to perform experimental therapy by restraining his patients in a heavy-duty straightjacket-like device before shutting them away in a drawer for corpses in the basement morgue.

In this element, Brody makes the character his own. Portraying an agonized and suffering man ? his specialty, thanks to roles in movies like “The Pianist” ? Brody’s unique facial expressions are more affecting than his anguished cries.

While in the drawer, after horrific war flashbacks, Starks is somehow transported to the future and discovers that he will die in a few weeks. With help from Jackie (Keira Knightley), a beautiful woman he meets in the future, Starks realizes what he has to do before he dies.

The most gripping part of this genre of plot-twisting, time-travel film is trying to figure out what is going on and what will happen with all the small pieces of evidence finally coming together in the end.

By doing away with chronological progression, The Jacket lets the viewers experience some of the horror that Starks goes through by the device of cutting randomly back and forth between Starks’ mixed memories to the uncertain future he visits while locked away like a corpse.

The film started out too confusing for my taste, but as Starks begins to spend time with Jackie in the future, I could put together the pieces of the puzzle.

A desperate man trying to survive his messed-up life, an evil doctor abusing his patients and a jacket that transports the hopeless to the future are elements that push the film into deeper psychological territory than most psycho-thriller movies.

The Jacket is not a simple sci-fi movie; it is the kind of film that makes you feel thankful for your normal life ? unless, of course, you find yourself locked away heavily sedated and helpless.