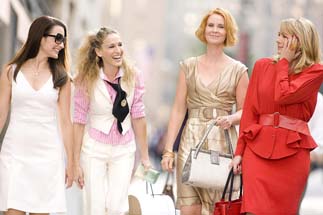 From left: Kristin Davis, Sarah Jessica Parker, Cynthia Nixon and Kim Cattrall reprise their roles as the female foursome of the TV series “Sex and the City” on the big screen. [MovieWeb]

When the TV series “Sex and the City” ended in 2004, it did so on an absolutely perfect note. Sure, it was hypocritical, seeing as the whole point of the show was to celebrate single women, yet they all end up attached, but there was no more fit ending for a romantic comedy show.

So when news broke that the Sex and the City movie was coming out, I had to have a serious discussion with a friend who is a serious fan of the show.

What could possibly be the conflict of this movie? Judging by the trailer, it appeared to be pure froth: “The ultimate single gal Carrie Bradshaw will be married to John James Preston come fall!” exclaims Charlotte (Kristin Davis) as she reads Page 6 in the New York Post aloud.

Well, no spoilers here, but the Sex and the City movie brings the drama in a way that only these four women could pull off. The pretense of a conflict can be summed up by Carrie’s line, again, in the trailer, “I let the wedding get bigger than Big,” referring to her fiance, whom she refers to as “Mr. Big” (Christopher Noth).

The problem with Sex and the City is that it paints a completely inaccurate picture of New York City, and women ? aspiring nouveau-riche Korean women being no exception ? are foolishly enamored of this fantasy. I argue that the show succeeded despite this escapist delusion because it worked within the constraints of TV: Each episode was only a half hour, keeping the writing tight and the action hilarious and potent. Plus, you can watch the show in the privacy of your own home, where you can escape the all-too-audible gasps and giggles from the ninnies in a theater.

But this is a monster of a movie, two and a half hours long, and only one scene made me laugh out loud. Instead, most of the time I cringed in my seat.

Most objectionable was the line: “Women come to New York for the two L’s: Labels and Love.” Carrie utters this line in reference specifically to 20-somethings who do indeed flock to the city in real life. But if my many friends there are any indication, they don’t go for either of those two L’s. They go to work, which is something that none of the four women ? not even workaholic lawyer Miranda (Cynthia Nixon) ? can be seen doing in the film.

The only people who seem to do any work in this film are the domestic helpers, like Magda, Miranda’s nanny, or Louise (Jennifer Hudson), Carrie’s new assistant who helps her piece together her life after a “crisis.” And of course, the destitute Louise comes to New York for “love,” while toting rented designer bags. At one point, Carrie gives Louise, whom she’s nicknamed “St. Louise from St. Louis,” a Louis Vuitton bag. To this, Louise exclaims, “You gave me ‘Louise’ Vuitton!”

Of course, there’s love in the movie, and I’ve had many a weepy moment with DVDs of Sex and the City, even though I don’t worship at the show’s shrine. But this time around, even though Carrie’s the one we’re supposed to be rooting for, the scene of her romantic denouement left me cold.

How else can one react when a character is so shallow that she’s nothing but a label whore?

Sex and the City