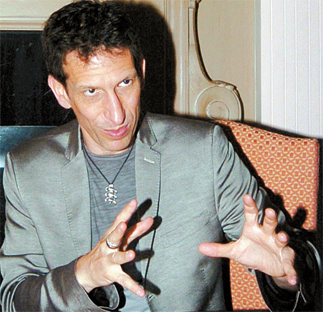 Matt Goldman, one of the Blue Man Group founders. By Lee Ho-jeong

What does it feel like being bald and blue? Matt Goldman says its “exciting” and “special.”

Goldman, a founder and one of the three chief executive officers of Blue Man Group, was in Seoul earlier this week to promote the upcoming Blue Man Group’s MegaStar World Tour, which opens on Tuesday at the Sejong Center for the Performing Arts.

Goldman said Seoul chose them rather than the other way around.

Goldman, who is from a family that has lived in Manhattan for four generations, said he loves cities, whether they be Tokyo, Seoul or Paris.

“Cities are big, spread out, vibrant and multicultural,” Goldman said. He added that he already feels like an honorary Korean as he has been exposed to the culture and customs well before he came here thanks to close Korean friend Ian Pai, who will be playing a drum during the tour in Seoul.

He added that the “Korean public has a certain loose, fun-loving nature, willing to be a little crazy, which is a perfect mix for the MegaStar show.”

He said he and his colleagues had a feeling that the Korean audience would embrace the Blue Man Group in a special way.

Goldman said one of the hardest parts in preparing for the Seoul tour was getting the right act as humor doesn’t translate easily.

“The humor doesn’t work the same [in different countries] but the sensibility of our humor is what we want to get through,” Goldman said.

He added that for the Seoul tour, the staff has added bits of Korean pop culture that the audience would relate to.

“It started really slowly,” Goldman said. He and his partners, Chris Wink and Phil Stanton would meet every week and bring up anything that was interesting, whether it was music, literature or a film. “Back then there was no real music scene, people were mired in politics and people started complaining,” Goldman recalled.

And then an epiphany came to all three men one day and they decided to go bald and paint themselves blue.

“If you make yourself bald and blue, and think ‘I’m going to make a living out of this,’ the first thing they should do is put you in a mental hospital and throw away the key because that would be crazy talk,” Goldman said jokingly.

But he said the moment the three put their thoughts into action, they knew something special was set in motion.