Preserving the history of Korean food from her house

Preserving the history of Korean food from her house 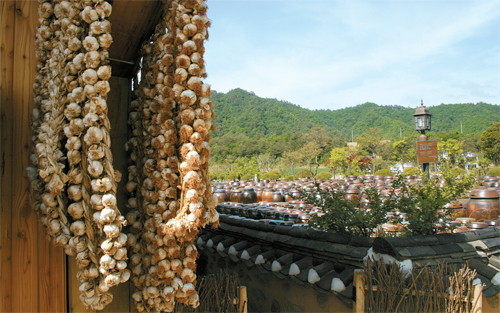 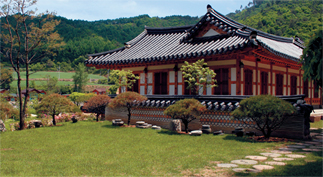 The hanok in Jungkangwon, an institution for traditional Korean cuisine.

PYEONGCHANG, Gangwon - The air is filled with the delicate scent of fried organic vegetables that add savory flavor to bibimbap, or steamed rice with assorted vegetables.

The jars are buried in salt and charcoal to keep fermented pastes fresh.

What you see here is rustic.

Garlic hangs from the hanok rooftop piled with wooden vessels, and a lotus pond reminds one of a Joseon scene. 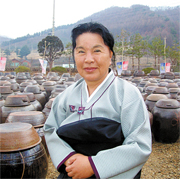 Cho Jung-kang, the founder of the cuisine institute.

In the backyard, Cho Jung-kang, the owner of the 33,058-square meter institute, cultivates some 300 vegetables, including cucumbers, pumpkins, red peppers, lettuce, cabbages and eggplants.

Cho, 70, built the traditional house in 2005 to preserve, develop and educate people about Korean food. There are daily cooking classes, with reservations needed. Prices vary. The most popular tour runs 90 minutes and costs 20,000 won ($19.50).

Her story begins in 1999, when she invested 3 billion won ($2.9 million) to buy land in Pyeongchang to build the traditional complex. The construction took seven years.

The surrounding was perfect for fermenting foods. And nature was all around - mountains and streams.

“People say the mecca of Korean cuisine is Jeonju, but the flavor is too strong,” Cho said. “Instead, I prefer cuisine from Gangwon Province ? it’s more mild.”

It wasn’t easy to start such an unpredictable business. She had to let go of her stable life as a well-known restaurant owner. 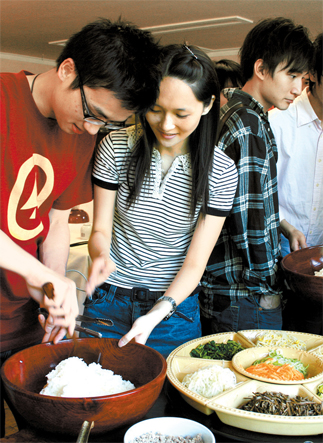 At 37, she opened “Dongchon,” a hanjeongsik restaurant that serves rice, stew and various side dishes.

“My food doesn’t contain any artificial flavoring,” she said.

Pursuing justice and loyalty, he led some 1,700 soldiers, including monks, to recapture taken land. Most died in the battle, himself included.

Cho wanted to preserve that spirit flowing through her family’s blood.

“Korean culture and cuisine should be taught properly,” she said. “And Koreans should be proud.”

But first you need to be educated, she says.

The institution has traditional cooking kits, a museum, hanok seminar rooms and an icehouse kept at 1 to 5 degrees Celsius (33.8 to 41 F) all year round.

The summer after Cho built the institution, heavy rain soaked ingredients, including soybean paste and kimchi. Some parts of the hanok are still under reconstruction.

“Words cannot express how shocked I was to see things collapse in no time,” she said.

But the incident steeled her to drive toward her goal ? establishing a school for traditional Korean cuisine.

“Fewer and fewer households make kimchi,” she said. “Naturally, some are not familiar with the process.”

She pictures an image of a royal kitchen depicted in the historical TV drama, “The Jewel in the Palace.”

With help from others, her vision is nearing fruition.

Yoo Myung-hwan, an official at the Gangwon provincial government office said, “Though there are no specific plans yet, we hope to turn the place into an educational tourist site.”

Cho’s youngest daughter, Kim Joo-sung, is also pitching in. Though she was an undergraduate industrial arts major, she decided to study food engineering for her master’s and doctorate.

Last week, Kim was making bibimbap with Han Young-soon, the general manager of the institute, and some 20 students from Hong Kong.

“The bibimbap recipe is inherited from the family ? it is 400 years old,” Kim said, while gently sorting one of the 18 vegetables on rice before mixing it with gochujang.

“It is said that you need a daily intake of 18 vitamins,” she said.

“Instead of taking concentrated supplements, why not eat a bowl of bibimbap?” she said.

After making bibimbap, Han led a group tour of the hanok.

“Hanoks have high ceilings,” Han said. “And there is hidden wisdom behind the architecture.” The high ceiling made of pine wood helps the air circulate better.

Visitors can spend a night here with a reservation.

“But it has been left out in the cold. It is now time to bring it back to our lifestyle.”

To reach Jungkangwon, take a bus from Dongseoul Bus Terminal (Gangbyeon Station, line No. 2) to Jangpyeong. The two-hour ride ticket costs 10,500 won. It is a three-minute taxi ride from Jangpyeong Terminal.

To learn about royal Korean cuisine in Seoul, visit the Institute of Royal Korean Cuisine, (02) 3673-1122, in Anguk-dong, central Seoul.