Roach clips laughs, cringes to her book on sex research

Roach clips laughs, cringes to her book on sex research 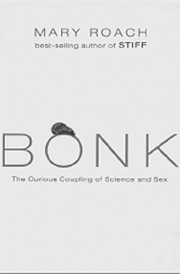 The funny thing about “Bonk, the Curious Coupling of Science and Sex” is that despite its topic, the book is not erotic. In fact, it’s sometimes downright uncomfortable. I don’t ever want to relive the chapter that goes into minute detail about a penile implant for an impotent man. Let me just say it involves the insertion of a steel rod on the operating table.
Author Mary Roach seems to sympathize with the male reader. In a footnote, one of dozens scattered throughout the easy-to-read 303 page book, she writes “A word of apology to the male reader. There is no way for me to adequately appreciate how uncomfortable this may be making you. As a consolation, I promise never to witness and describe the insertion of a Disposable Internally Applied Penile Erector.”
I’ve never read a scientific book that is so hilarious and entertaining, except for maybe one: Roach’s previous book, “Stiff: the Curious Lives of Human Cadavers.” In that book, she chronicles the lives of funeral home directors, coroners and others who make their living around the dead.
Unlike previous efforts, Roach actually takes part in the research for “Bonk.” That’s right, despite the reluctance of her husband (and partner in the lab) she participates in the research she chronicles. “There are times when the only way to gain entree into the world of laboratory sex is to be the queasy one yourself: to volunteer,” she writes.
I suspect Roach could have written the book even without that level of involvement. In fact, she writes those sections so carefully that it’s almost hard to understand what is going on. As Roach says herself, she is obsessed with research.
To give you an idea how wide-ranging it is, here is a handful of topics Roach covers in “Bonk”: the tiny size of the panda’s penis, the ejaculation of boars at pig farms, hands-free orgasms, whether dead men can get an erection (yes, it’s possible) and the location of the g-spot. By the way, it was the researcher Beverly Whipple who coined the term g-spot. She thought about calling it Whipple spot, but “refrained for the sake of her children and other innocent Whipples,” Roach writes.

The only problem with the book ? which is almost a credit to Roach’s level of research ? is its circuitous nature. Roach uncovers so many nuggets that she’s onto a different topic almost every third page. Within one chapter, we lurch from a story about sex researcher Ahmed Shafik, who works in secret in Islam-dominated Egypt, to the fact that monkeys don’t care if anyone is watching them have sex.
Just to add, Shafik was nominated for a Nobel Prize. Roach writes that when she called the institute to confirm this, she was told that the names of all nominees are kept secret for 50 years. “You make the claim and nobody can prove otherwise until after you’re dead,” Roach writes in one of her ubiquitous footnotes. “Add one to your resume today!”
This book is worth reading just for the introductory chapter, where she writes about chit-chatting with Frank, the manager of the building, in her small office.
While they talk about vandalism to a Coke machine, she crosses her legs and accidentally knocks over a hardcover book that lands faced up, with the title “Atlas of Human Sex Anatomy” in 90-point type. After a brief pause, the two go back to talking about the Coke machine, “but nothing has been the same since.”
Roach writes about how people assume that you are some kind of pervert if you research sex. “My first book was about human cadavers, and as a result, people assumed that I’m obsessed with death. Now that I have written books about both sex and death, God only knows what the word on the street is.”
I can’t wait to read Roach’s next book.