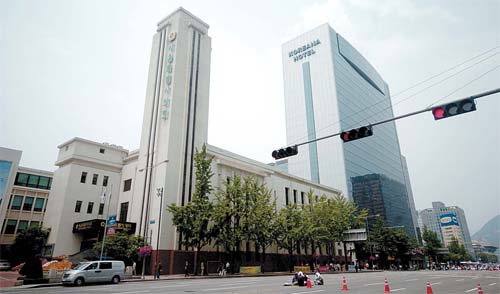 On July 24, 1945, less than a month before Korea’s liberation from Japan, a set of bombs went off in the capital, scaring the people gathered at the Gyeongseong Bumingwan building.

At the time Seoul was called Gyeongseong, or Keijo in Japanese, and Koreans were still fighting for independence.

The bombing was one of the last violent acts in the independence struggle before the nation was set free with Japan’s defeat ending World War II.

The bombs that were planted by young independence fighters exploded much earlier than anticipated.

No one was hurt by the explosion and no one was caught by the Japanese authorities.
The bombs were planted the day before by members of an organization, Daehan aeguk cheong nyeon dan, or Daehan Patriotic Youth Party.

The organization was founded two months prior to the bombing by young Koreans, including Yoo Man-su and Cho Mun-gi.

In February of this year Cho passed away at the age of 81. Cho was born in Hwaseong, Gyeonggi Province, in 1926.

He moved to Japan in 1942 and orchestrated a massive anti-Japanese riot of 2,000 Korean laborers in Japan. On returning to Korea he founded the organization.

The members of the patriotic party were attempting to kill Korean collaborators, such as Park Chun-geum, as well as a number of Japanese officials. The Koreans were gathered at the building to once again pledge their loyalty to the Japanese empire.

Although the bombing did not go off as planned, it struck fear among pro-Japanese supporters as well as Japanese officials.

After more than 60 years, the only reminder of the event is a small stone tablet located on a small lawn beside the Bumingwan building, which today is better known as the Seoul Metropolitan Council building.

Although the inside of the building has been modified for use as the city council building, the exterior retains its original form.

The building looks very different from the modern high-rises surrounding it. The architecture of the structure is bold and heavy, its color a worn-out yellow. 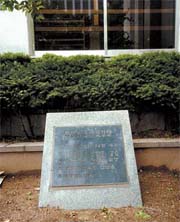 Marker commemorating the bombing attempt in 1945. By Lee Ho-jeong

The building sits across from Seoul City Hall and next to the Koreana Hotel. Ground was first broken for the building in July 1934 and it was completed in December 1935.

Construction was aided by a 1 million won ($977) donation from Gyeongseong Electric.
When first built, various cultural performances, including ballet, plays and music concerts, were held at the venue. Later the building was used mostly for political propaganda of the colonial Japanese government.

Another structure that has survived since the colonial period is Seoul City Hall.

Today the front plaza of City Hall with its wide green lawn and dancing water fountain serves as a rest area and a venue for public events.

With its austere appearance, it once was a symbol of Japanese colonial rule and Japanese attempts to break the spirit of the Korean independence movement.

During colonial rule, the building was called Gyeongseong Bucheongsa. Much like today it was the administrative seat of the government of the nation’s capital.

Sohn Jung-mok, a professor at the University of Seoul, said the Japanese colonists intentionally constructed the building right across from Deoksu Palace to break the Korean spirit.

“Deoksu Palace was where King Gojeong resided for 22 years until his death in 1919,” Sohn said. 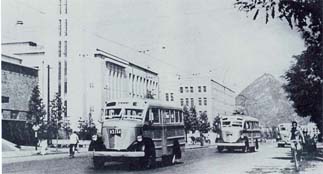 Gyeongseong Bumingwan building in the 1930s. Provided by City of Seoul

The professor said that because Korea had to sign a number of unfair treaties with Japan, students gathered in front of the palace gates to plead to the king. Tension heightened after the March 1 independence movement that brought about a massive nationwide uprising.

“The Japanese believed they had to break the spirit of the area that was the origin of the independence drive, as well as the worship of the Joseon King,” Sohn said.

There are continuing assertions that when seen from above, the building had the shape of the Chinese character which spells Japan. This is still debated.

Originally the Gyeongseong office was located between today’s Bank of Korea building and Shinsegae Department Store. The building was constructed as a two-story edifice with a Renaissance touch in December 1896.

Before it became an administration building, it was a Japanese diplomat’s office, as Korea was still independent when it was erected.

The building became the seat of government for the capital when Korea was annexed by Japan in 1910.

The Japanese government decided to build a new building as the city expanded and more people were coming to the city.

There were five possible sites for the building and it wasn’t easy for the Japanese government to choose.

According to Chung Jae-jeong, a Korean history professor at the University of Seoul, the final site was chosen because it was close to the Japanese commercial district, today’s Mugyo-dong, and because the land was on a slight grade, allowing a downward view of the surrounding areas.

The site was located near Namdaemun market and Euljiro. And it was close to Sogong-dong, where many foreigners lived.

Construction on the new building began in March 1925 and was completed in October 1926.

Last week the Seoul City Hall building ended its service that had lasted for over 80 years.

The building will be renovated to be used as a library and a history museum.

The Seoul government is temporarily using its Seosomun annex, which was formerly a prosecutors’ office.

Construction of a new City Hall of more modern design, featuring glass walls, is now underway behind the current building.