Burnout at the Blue House

Burnout at the Blue House 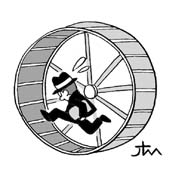 The early bird catches the worm. This is a time-honored maxim familiar to everyone. This saying was brought to mind by Lee Myung-bak during the days of his presidential transition committee.

Lee is famously known as an early riser his entire life. Shortly after his election, he voiced his view in an interview that public officials are the servants of the people and as servants, should rise earlier than their masters. One more hour of work in the morning by public servants means one more hour of service to the people. Everyone at that time, of course, was impressed with the president-elect’s diligence. We’ve finally got a president who’ll work day and night, we thought. This president even said he did not believe in weekends.

After Lee’s inauguration, many people became early birds, emulating the president. To prepare for the daily presidential senior staff meeting at 8 a.m., Blue House staff members were already at work by 6:30 a.m. everyday. A growing number of staff members have reportedly rented apartments downtown to save time getting to work. In the past administration, we found out that certain Blue House staff had rented downtown apartments for extramarital affairs. In this administration, who has time for hanky panky?

We can now rise in the morning knowing that our government is full of diligent, hard-working bureaucrats. It was groundless grumbling by a few sour grapes that fatigue would soon hinder officials’ minds from functioning properly or that severe lack of sleep could hamper clear judgment. Today’s world is full of worms to catch and the times call for an early-bird nation, with humans living 48-hour days.

So, what is this that we’re hearing from a Blue House staff member? “I haven’t rested a single day during the 100-some days I’ve been working for the president. The hours in the office during the weekend are no different from during the week. If you catch the last shuttle bus leaving at 10:20 p.m. from the office, you’ve having a lucky day. I haven’t been able to have a decent conversation with my wife in weeks. A few days ago, I’ve had a chance to meet relatives for the first time since I took my job and hear about the outside world. I had no idea that public opinion had grown this bad. It isn’t just me; It’s the same for everyone in the Blue House.”

The president doesn’t need to look far to find the reasons for the lack of communication he pointed to recently. When you’re working 24/7, it is hard to find the time to listen and talk to people. So we end up having servants who never listen to their masters. There’s another proverb that comes to mind: All work and no play makes Jack a dull boy.