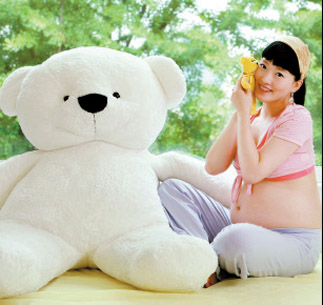 Kim Min-young takes part in a photo shoot at a studio in southern Seoul. Such shoots are a big part of Korean-style baby showers.Provided by the organizer

Last week, Kim Min-young, 31, and Go Eun-sun, 29, gathered with two other friends at “Piace,” a studio in Cheongdam-dong, southern Seoul, to celebrate their last month of pregnancy.

“Expectant mothers, including myself, no longer patiently wait for the newborn baby,” Kim said. “Instead, we celebrate.”

The room was decorated with pastel-tone balloons, stuffed animals, baby gifts and congratulatory placards. Amid the fairy tale-like atmosphere, Kim and Go were busy posing for pictures.

“A new Western-style culture has crept into our society,” Go said. “Mothers celebrate even before the child is born.” 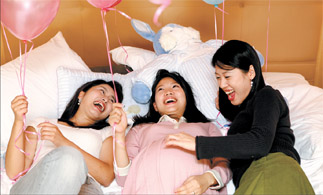 Baby showers, generally arranged by a close friend, have been common for the past few decades in North America, and more recently have expanded overseas, to Europe and Asia. The purpose is to “shower” expectant parents with baby-related products that they’re going to need very soon, such as baby clothes and toys.

Go came across baby showers in American TV shows such as “Sex and the City.” But she didn’t know Korea also had its own take on the celebrations until she visited Bebe House, a baby-oriented portal site.

The company throws a monthly party for expectant mothers at various studios in Seoul and Gyeonggi Province.

Since the event is first come, first serve, and free, it was very competitive for Kim to win a seat.

“We [pregnant women] rarely go out and meet friends,” Kim said. “The party is refreshing and we get to share information about giving birth.”

The baby showers at Piace are called “D-line Festivals,” referring to the shape of the stomach. Mothers take pictures, play games, open up gifts and eat.

Though it is Kim’s first baby shower, she feels something is missing.

“There should be more events,” she said, referring to yoga classes and lectures on giving birth and breast feeding.

“All we do is take pictures.”

Jee Yong-han, the head of Piace and the organizer of the studio’s baby shower, is aware.

“Baby showers in Korea are different from those in the United States or Canada ? where they originated,” he said.

Baby showers were introduced to Korea two years ago and the celebration has become “Koreanized,” according to Jee.

“Aspects of Western culture adapted by Korea often transform according to local cultural patterns,” he said. “A new culture is created.”

Baby shower packages offered by the Plaza Hotel and Westin Chosun include a professional photo shoot, demonstrating the focus of the Korean version of a shower.

“Hotel baby showers are a luxury,” Go said. “But all you need at your party is light food and friends to chat with.”

The Plaza Hotel’s sales of its “Million Dollar Baby Shower Package” (320,000 won) have increased 10 percent between March and May compared to the same period last year, according to Kim Soo-yeon, a hotel representative. The package includes an overnight stay, photo shoot and brunch.

“Though the package isn’t tremendously popular, the trend is growing with the influence of American shows and Western culture,” said Kim.