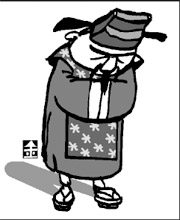 When former President Roh Moo-hyun served as the minister of Maritime Affairs and Fisheries, he said, “There are only three ministers at the cabinet meeting who deserve respect.” They were the former Minister of Agriculture and Forestry Han Kap-soo, the former Minister of Commerce, Industry and Energy Shin Kook-hwan, and former Mayor of Seoul Goh Kun. They have all served as high-ranking bureaucrats over the last 30 years. It is not a coincidence then that President Roh appointed Goh Kun as his first prime minister. He played a key role in an insecure amateur government with his experienced political mind.

Japanese historians insist that their emperors came from one origin throughout their 1,500-year history. The second-highest position under the emperor was that of daijodaijin; it was similar to the seat of prime minister during the Joseon Dynasty, but enjoyed more prestige. The daijodaijin was in such a powerful position that even if he broke the law, he was exempt from impeachment. He was a teacher of the emperor, and could rule as regent. However, Fujiwara Nobuhito (659-720) refused such a tempting post three times. He enjoyed enormous power to the extent that his two daughters married an emperor and a prince. But he always acted modestly. He forfeited his promotion, repeating, “I’m afraid of the many eyes that are watching me from behind.” He was posthumously given the honors of a daijodaijin anyway.

Since then, nobody has ever dared to have a desire for the position. The only exception was Toyotomi Hideyoshi. Even Tokugawa Ieyasu served as daijodaijin for just one month. After Nobuhito’s refusal, it became a tradition in Japan that the post of daijodaihin remain vacant. The Fujiwara family gained public support and succeeded in monopolizing political power, mainly because Nobuhito took a modest attitude. The Fujiwara family prevailed in Japan for 1,200 years by continuing to marry into the Japanese royal family.

Recently, top presidential secretaries submitted their resignations over the controversial U.S. beef import deal. In addition, cabinet members are expected to step down. It is a sign of desperation that the government should take such bold measures to regain public support.

With this opportunity, why don’t we hire people from a wide range of fields depending on their capabilities? It is a good sign that President Lee Myung-bak is committed to taking a modest attitude and acknowledging his own imperfections. It would be better still to learn from the Fujiwara family how to have a modest attitude. Some historians suggest that the royal family of Baekje, one of the three ancient kingdoms of Korea together with Goguryeo and Silla, might have migrated to Japan and started the Fujiwara family. If so, where has Korean modesty gone.