No pain, no gain for the streetwise ajumma squad

No pain, no gain for the streetwise ajumma squad 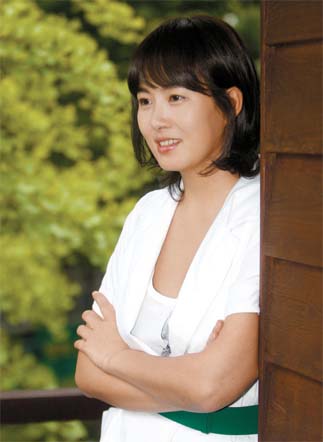 Life is tough for four ajumma, or housewives, in “Girl Scouts,” an action comedy directed by Kim Sang-man.

The film was released last Thursday. It is the only Korean film that was included among the top five ranking, as of Monday.

The film takes place in Bongcheon-3 dong, a deprived area in Seoul where this aggressive middle-aged squad lives.

The squad members are I-man (Na Moon-hee), a woman in her 60s working at a supermarket to look after her unemployed son; Bong-soon (Lee Kyung-sil), a widow who lives with an ill child; Mi-kyung (Kim Sun-ah), a divorcee; and Eun-ji (Ko Jun-hee), a caddie. 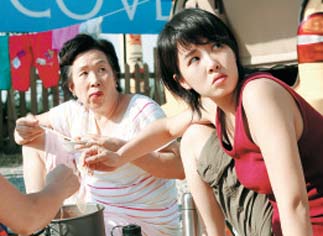 The four women are determined to raise the money to open up a store in their neighborhood.

It is their sole hope and dream.

Though they try their best, they are hit by a piece of news that comes at them like a bolt from the blue.

Hye-ran (Lim Ji-eun), who used to be one of the squad members and who is in charge of their collective savings, runs away.

The four ajumma, ranging from their 20s to 60s, chase down Hye-ran.

Mi-kyung, in her 20s, is the main character in the film. She aggressively drives a yellow van, and in one scene she makes a dramatic 360-degree turn in the road while giving chase.

Her scenes, though, are more serious than comic.

“I made an agreement with the director that the character shouldn’t be funny,” Kim said. “Mi-kyung is a divorcee with a child to look after. Her life is tense.”

If Mi-kyung made people laugh, the story wouldn’t be realistic or deep, according to the actress.

Instead, Mi-kyung responds to other comic plays.

It was challenging for the unmarried Kim to be an ajumma.

During the pre-production meetings, the crew and the director wondered if Mi-kyung should be married with or without kids or just remain single.

“The life of a married mother with kids is more complicated,” the director told Kim after the meeting. And the actress agreed.

“Mothers who look after children tend to be stronger,” Kim says.

“Despite life’s up and downs, they [single mothers] have a reason to live ? their kids.”

The actress explained that Mi-kyung becomes more resistant and mentally much tougher when Hye-ran kidnaps her daughter.

Kim believes the film’s emotions are based on similar events that have taken place in real life.

“In most films and dramas, ajumma appear with tight perms and loose pants,” Kim says.

But she questions whether housewives really dress like this these days.

“No matter how poor their living conditions, middle-aged women rarely wear loose pants,” Kim says, according to her observations.

Instead of baggy pantaloons, Kim shot her scenes wearing three T-shirts, two pants and one pair of sneakers.

That’s all she needed, though later on, one shoe wore through.

“It’s probably because I had so many action scenes,” she said.

In fact, Kim’s experience on the set proved to be a physical one. She showed her swollen anklebones and legs due to the shoot.

And that’s not all.

While shooting, “Yesterday” (2002), she hurt her pelvis ? there were many kicking scenes.

“I can still feel the pain,” she says.

While filming “She’s On Duty” (2005), Kim’s legs were always swollen, she said, because she had to run so much.

“I always had to wear my ankle brace and a slip-on compression wristband,” Kim said.

To Kim, however, the level of scars or aches are in proportion to how earnest or eager she was in the film.

As they say, no pain, no gain.

“I’m most happy when I’m asked if making the film was a painful experience,” she said.

“The aches I receive reflect the amount of effort I put into the film.”