Life-long fan of a summer craft

Life-long fan of a summer craft 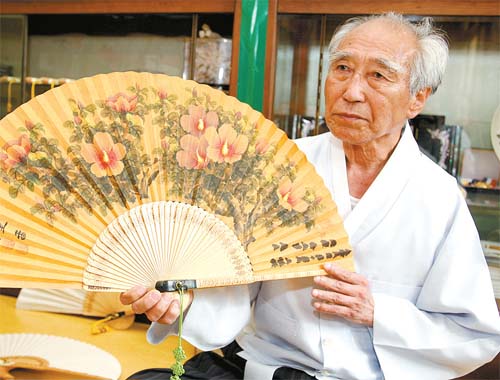 The Korean ancestors expressed summer poetically by saying the fresh and clear scent of verdure is better than flowers.

The weather outside today fits perfectly with this saying. As spring gives way to summer, the pretty colors of blossoms and flower gardens give way to an expanse of green.

Hotter weather means stickier conditions, though, and it’s no surprise that this is also the season for air conditioners and electric fans.

But even with today’s technology there is still at least one person who upholds one ancient tradition: Korean fans.

Lee Gi-dong, 78, a resident of Jeonju, North Jeolla, has been making traditional bamboo fans for 63 years. Known as hapjukseon, his fans are considered by many to be the best in the craft.

In fact, the market assessed the value of his work to be more than several million won.

The 47 fans that Lee donated to the Jeonju government two years ago are valued at more than 500 million won. The collection includes Najeonchilseon, Hwangchilokjogakseon, and Jogakmugunghwaseon, three of his more famous works.

Last year on Dano, which falls on May 5 each year, according to the lunar calendar, former President Roh Moo-hyun distributed Lee’s fans to the nation’s 16 city mayors and provincial governors.

Dano is considered the start of summer, according to tradition.

Hence, many Koreans in the past purchased their fans around this time of year.

It was also common practice for kings during the Joseon Dynasty to give fans to subordinates for their hard work. It was this tradition that Roh tried to revive.

“I started this work as a way to survive, but now, as it is all that I have been doing. It is a work familiar to my hands,” said Lee.

Lee moved from Jangseong, South Jeolla, to Jeonju when he was 12. His family was poor, but things got even worse when his father suddenly passed away. The family moved to the outskirts of Jeonju to find a living. But Lee was so young that all he could reasonably do was run errands.

When Kim turned 17, a family friend suggested he learn the art of making hapjukseon, as the business looked promising and fans were being exported overseas.

The friend introduced the young man to Bae Gwi-nam, who at the time was widely known as the master of hapjukseon in Jeonju.

Since then, Lee has worked under Bae and five other apprentices of the master.

Although Bae gave Lee shelter and food, Lee said it wasn’t easy for him to sit for hours struggling with bamboo. He admits he was too young and immature at first.

In the first two years, he ran off without a word to anyone on five occasions. Yet when Kim returned, his master never scolded him.

Lee’s wanderings ended when he turned 19. “I was supporting my mother but I had no other skills except for making fans, which I learned over the shoulders of my master,” Lee said. “There was nothing else I could do, to be honest, so I really worked hard.”

Lee said before he became serious, Bae only gave him tedious jobs. But when he showed how much he was willing to learn, Bae started to teach him the real skills, such as treating the bamboo and trimming it.

After three years of study, Lee was able to at least imitate the work of his master. That’s when he decided to go independent.

In the beginning it wasn’t easy making a living. His work was dismissed because it contained flaws. Lee was only paid the minimum as he made fans with materials provided by the client and therefore he couldn’t charge the customers full price.

Lee said back then a person who owned two cows was considered rich. With 100 fans, a person could purchase a single cow.

But with a lack of finances and marketing ability, this was just a dream for the young fan maker.

Lee said he was married at the age of 26 and had eight children. Having a large family made life challenging. He had only a small income trickling in.

Irritated, Lee said his wife even told him to take up another business and give up making fans.

But when his wife complained, he became more stubborn, and he worked even harder at his trade.

“I drank a lot in anger because of my life. I drank until the black shirt turned white,” he said, using an old expression that describes intoxication.

Lee said his life started to take a turn for the better in the 1970s when Koreans started to show more interest in traditional culture.

In 1972, Lee participated in a nationwide competition on folk art products for tourism and he won a special award.

Lee’s name became well known. Orders came in from everywhere, giving him the capital to buy his own materials, which in turn allowed him to charge clients the full value of the products he sold.

Since then, he’s won awards in various competitions every year, and he still makes up to 6,000 fans per annum.

Lee makes his own tools as well, including the steel knife he uses to shape the bamboo.

He says he has gone through 100 such knives over the years.

Lee’s eldest son, Lee Bong-jook, 48, has been learning the skills from his father for the past 28 years.

Ironically, Bong-jook says the more he learns about making fans, the harder the job gets.

Bong-jook says he only makes 1,000 fans a year to preserve their quality.

The fans made by the Lees aren’t sold in the open market. Instead the orders have to be made directly.

Many orders come from tourism organizations and from the Blue House, as the fans are distributed as presidential gifts.

“My father is a very attentive to his craft,” Bong-jook said. “He will throw a fan on the fire if there is a hint of an imperfection. I wish he could be a bit more lenient, but he would not approve unless each single fan is made properly.

He usually has orders for 200 to 300 fans a month, but around this time of year his workload doubles.

Because he is so fastidious, meeting demand is a tough task.

It takes about 100 days to make a hapjukseon, including the first step, which is to cut down the bamboo in late fall or winter.

No machine is involved in the process; each fan is handcrafted.

Therefore, patience is a virtue in this line of business.

The secret of making the fan is cutting the bamboo just right. The cut must not be too thin or too thick.

The older Lee says what makes hapjukseon so appealing is that strength and softness are harmonized, which is how people should be, he says.

“People should not cower,” he adds.

Five years ago Lee suffered a stroke and his speaking is not as clear as before. Yet the last words he spoke that day were clear enough.

“Even when I am reborn in this world, I will make hapjukseon.”