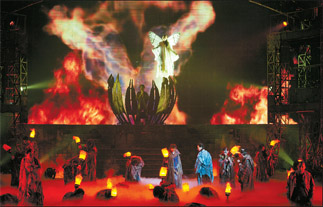 A scene from Eurobeat, which is the opening musical of the Daegu International Musical Festival. [JoongAng Ilbo}

Next week Daegu the largest city in North Gyeongsang is putting on its glittering costume and tapping shoes as Gene Kelly like sing and dance will be taking over the town.

So musical lovers, it’s time to head down south if you want to get a kick of the finest tunes in the country.

This is the second year that the festival is opened and it one of the few festival that is dedicated to the musical industry.

Last week during a press conference Kang Shin said, “When it comes to supply and demand of the musical market Daegu come in second trailing behind Seoul.”

He added that Daegu is a city that has huge potential to grow as the center of the musical industry.

“Daegu has the second largest audience next to Seoul when it comes to musical,” Kang Shin said. “People from neighboring cities like Busan and Masan travels to Daegu to watch a musical. Also other than Seoul, Daegu has the largest number of musical theaters. In 2011 an exclusive theater for musical is expected to be completed,” Kang Shin continued.

“Daegu has the potential to grow as a musical center in Asia.”

According to the organizing committee, in an effort to attract musical fans to the city they have introduced a package that would lift the financial burden.

The organizing committee is hoping to lower the ticket price to that of a movie next year.

For the opening of the festival, “Eurobeat: Almost Eurovision” will be performed at the Daegu Opera House. The Australian musical a satire of Eurovision, one of the longest running European song contests that has introduced the world to world-famous artists including ABBA and Celine Dion.

The closing musical is “Butterflies”, the first Chinese produced musical. This musical, which made its debut last year, is considered one of the most massive musical projects created in China. The story is based on an old Chinese legend, “Butterfly Lovers.” It is about a tragic love between Liang Shanbo and young maiden Zhu Yingtai. The musical claims to tell a tale of love, conspiracy, madness and murder.

During the festival 17 musicals will be showcased for visiting audience. Among the musicals six including “Sound Thief” and “Audition” are shows that are invited.

In the case of Sound Thief, it is a musical that made its debut earlier this year. It is a musical about a girl who is deaf who helps people to find music in their heart.

Three musicals “My Scary Girl” “In the Time of..” and “Forever” are new musicals that have been recently created by professional Korean teams and making their debut through the musical festival.

Eight musicals including “Cats” and “Fame” will be performed by college students.

During the festival there will be a forum where the panels will be discussing on the future of the musical industry in Korea.

On the last day of the festival July 7, an award ceremony honoring the best musicals in the country will be held at the Dong-gu Culture & Athletic Center at 7 p.m.