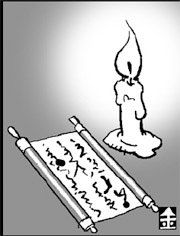 There are different types of misunderstanding. You may be so stuck to your own ideas that you simply don’t understand someone else’s point of view. Or you could be so persistent in your own thoughts that you misinterpret the comments of another. You may even change someone else’s words to suit your own ideas. There may be situations in which misunderstandings bring about positive results, but people should try their best to avoid such confusion.

The following story shows how misunderstandings can lead to unexpected outcomes. It happened during the Warring States period in ancient China. A member of the powerful Chu Dynasty was writing an official letter to the finance minister of Yan Dynasty.

While he was writing, it became dark, so the writer said to his servant, “Raise a candle.” As the servant raised the candle to brighten the room, the letter writer included the sentence he had spoken to his servant in the letter by mistake.

It must have seemed extremely strange to read the random sentence “Raise a candle” in the middle of an official letter. However, the finance minister was happy to find it. After pondering its possible meaning, he concluded that it had been a message aimed at expelling darkness and finding talented people across the state.

The moral of this tale, as it appears in the book “Hanfeizi,” is not to foolishly misinterpret others’ words.

These days in Korea, many misinterpret the intentions of the people who attend candlelight rallies. The United Democratic Party members joined the protests even though the people want them to work as their representatives in the legislature. The Grand National Party, which should be busy handling the issue, is instead preoccupied with power struggles inside the party. Some leading protesters joined in because of concerns over their livelihoods, and are now shouting for the administration to resign.

One shouldn’t find consolation in thinking that the tale in Hanfeizi had a happy ending. Another book, “Liji (Record of Rites),” noted that even the slightest error in measurement would lead to miles of difference in the end.

This is a good lesson for those who govern the country. Politicians must be aware that their small mistakes will eventually cost them. They must be responsible and avoid misunderstandings.


*The writer is a deputy international news editor of the JoongAng Ilbo.