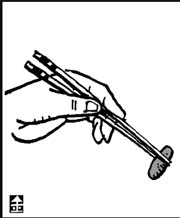 A soccer team becomes stronger if it has a leftie on the pitch. In fact, the number of left-handers around the world remains stable at 8 to 12 percent of the entire population regardless of age and race.

There is an assumption that the proportion of left-handers has remained unchanged because they have a competitive edge in man-to-man combat. Right-handers are better equipped to counteract other right-handers in various sports, such as fencing and boxing. However, they are particularly vulnerable to left-handers’ attacks.

Thus the word “sinister,” derived from the French sinistre, left or on the left side, also implies something evil or harmful.

There were many societies that tried to change left-handed people into right-handers, mainly due to cultural prejudice. Changing hands can have a success rate of 70 percent before the age of nine, but it falls sharply to 20 percent after nine.

The mystery of a left-handedness cannot be solved completely, even with the help of modern science. It is possible that handedness is hereditary, however, it does not follow the Mendelian inheritance law.

Whether left-handers are smarter than right-handers is another unsolved question.

Some people suggest that the movement of the left hand depends on the right brain, and thus left-handers have a better sense of time and space, which the right brain controls.

They also claim that among such great artists as Leonardo da Vinci and Michelangelo, many were left-handed; right-handers have a developed left brain, giving them excellent linguistic (expressive) capabilities.

Experts theorize that because left-handers are minorities, they have to overcome many difficulties and obstacles which push them to become high achievers. Recent research shows that left-handers perform better at playing computer games or flying fighter planes, which require swift information processing in the brain. It is mainly due to the fact that the right side of a left-hander’s brain can be quickly linked to the left.

It seems unnecessary to force left-handers to use their right hand in the 21st century.