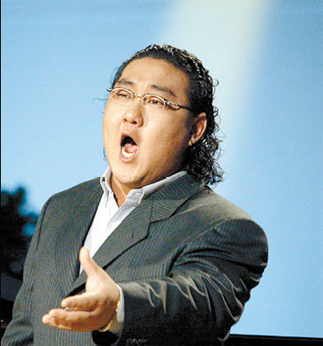 “Sa-rang-hae, Pa-mi-na” can be translated as “I love you, Pamina.” The Korean alphabet at the German opera is used as a means for young handsome prince Tamino to express his desperate love to the Queen’s daughter, Pamina.

Tamino walks toward the blackboards on each side of the stage and writes those letters. While birdcatcher Papageno is singing and playing, Tamino rewrites them. The letters get larger and larger, representing the prince’s growing love.

Rising Korean tenor Kim Woo-kyung plays Tamino. He’s also the one who came up with the idea of writing the Korean alphabet on the blackboard. He suggested it to costume and stage director Achim Freyer, known for his colorful and hilarious staging. 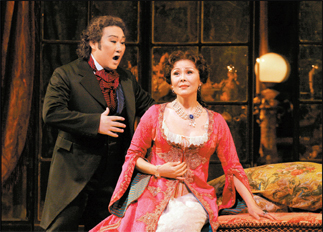 Kim became the talk of town in the opera world in 2003, becoming a permanent member of the Semperoper ensemble. He was just 27, fresh out of the University of Music and Performing Arts in Munich.

His contract with the ensemble ended in July last year, but Kim is still a regular in the production of The Magic Flute.

Besides Tamino, Kim has performed a variety of roles, won numerous prizes and made critically acclaimed debuts at the Metropolitan Opera, Carnegie Hall, the Munich State Opera, the Royal Opera House and Covent Garden.

The global opera star is making headlines again, this time with Korean songs. Kim recorded his debut album of 13 well-known classical Korean songs with the British record label MSM. Titled “Korean songs,” the CD will be released in August in Korea.

“It wasn’t an easy task recording Korean songs,” Kim said. “There were some miscommunications with the record label. I didn’t like my first recording so I did it again. But the producer released an album with the first recording by mistake. If I had sung operatic arias, there wouldn’t have been such a miscommunication. I guess to the producers who weren’t familiar with Korean songs, the two recordings sounded similar.”

Currently, MSM is reproducing Kim’s album. Why did Kim choose Korean songs that put him through such trouble?

“It’s the same reason I wrote Korean letters in The Magic Flute. If I do the same things European singers do, it makes no difference.”

It’s that kind of thinking that got Kim through the tough competitions with his fellow European singers. Kim remembered singing with an Italian soprano who was more than 20 centimeters (7.9 inches) taller than he.

“I felt small in his presence and lost my nerve. But soon I was excited with the fact that in spite of my height and skin color, I could still wow the audience. I now think it’s my strength.”

Listening to his album of Korean Songs, one can feels that security and self-assurance. As Tamino in The Magic Flute, Kim’s voice was light and clear. Singing Korean songs, he sounds more comfortable and at home.

Kim and Hong performed starring roles (Alfredo and Violetta) in Verdi’s “La Traviata” at the New York Metropolitan Opera in January last year. It was the first time that Korean-born artists sang both major roles in the Met’s 127-year history.

The two will perform leading roles in “La boheme” at the Royal Opera House in London in October.