[TV Review]Something to yell about in new debate show

[TV Review]Something to yell about in new debate show 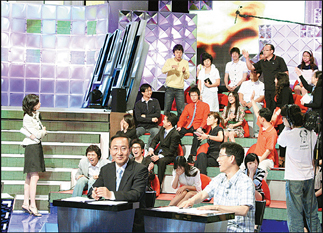 A scene from the rowdy “Closer Debate” on Cable’s XTM. [XTM-TV]

It was only six months ago that this TV column headline read “Warning: TV debates may cause drowsiness.”

Back then, I wrote that shows on current issues and controversies were torturing audiences.

It was common to see people in the studio nodding off in the back row during long, boring and meaningless hours of verbal sparring.

However, in just six months all that’s changed. This is now a more turbulent time.

People from all walks of life have taken to the streets holding candles and aiming some choice words at the already unpopular government.

Now audiences in debate shows are evolving into new creatures, taking the lead in studio discussions.

MBC-TV’s “100-minute Debate” recently gave birth to an Internet star, a college student from the studio audience who propounded her views against the decision of the Lee government to resume U.S. beef imports.

Her name has been one of the hottest keywords on the Internet ever since.

Cable TV is under less restraint than its terrestrial cousin, making the evolution of audiences in debate shows more visible.

Airing Fridays at midnight, the show debuted this month as a wholly new mutant of the genre.

Instead of sitting at the back of the studio with a limited chance of participating, audiences are sat nearer the cameras and encouraged to stand up and shout (yes, shout, literally) their viewpoints.

The show features political commentators and professors, but they are not the focus. The tagline is “No rules, no limits and no themes” and “Catharsis for the people,” ideals the show seems to stick to.

The debut episode, for example, debated the pros and cons of the first three months of the Lee government.

One audience member stood up and said, “So I got married to a man, and three months later, he’s starting to beat me up. Should I just put up with him?”

The infuriated 32-year-old woman, voicing her anger, was then interrupted by a 49-year-old housewife who defended the Lee government. “Lee is like a baker who just opened a shop. We should be patient and wait for him to get used to his new situation so he can bake the bread just right.”

She could barely finish her sentence, however, as a 20-something college student said, “Why should I buy bread that’s no good?”

The next part of the conversation was not even audible, because people were talking over each other.

That was only the beginning, though. The audience continued to spit out rapid-fire comments, creating pandemonium.

Sometimes, an audience member picked a fight using completely irrational arguments. “Are you an exorcist or something? How can you be so sure that Lee will fail?” said one.

A 30-something stockbroker even attacked legislators in front of legislator Roh Hoe-chan, saying, “You know, I want to beat up legislators sometimes.”

Roh responded leisurely: “Well, you should have elected your legislators more carefully in the first place.”

For a good hour, the show was filled with, at times, acrimonious comments and arguments. The show’s producers even appeared on the set, whispering, “This is a mess.”

The show, however, was well received as a “refreshing approach” to the TV debate format.

You may wonder why Koreans this reviewer included care this much about debate shows. Well, we haven’t been able to avoid street protests for several weeks now, and TV shows like this are gaining more attention.

Sure, this is not ideal viewing for a precious Friday night, but things are different these days. Even though I miss a placid Friday evening’s telly, I know I’ll want to tune in this week to hear what others are shouting about.