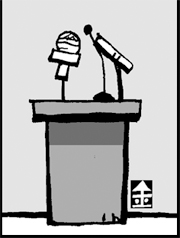 The 1961 Bay of Pigs invasion was based on mistaken assumptions at every step. The Americans assumed that the Cuban army would be at a loss and run away. They also thought Cubans would support the invasion in a national uprising, and thus the Castro regime would immediately fall. Further, the Kennedy administration tried to cover up the fact that the Cuban militia force had been supported by the United States. However, evidence has been revealed to support the allegation that they were organized and armed by the U.S. military.

How could the elite U.S. national security apparatus make such a stupid decision unanimously?

Irving Janis, a research psychologist at Yale University, did some research into the case and came up with a term describing this distorted way of thinking ? “groupthink.” It is a situation where members of a group are unable to reach a rational decision under a specific environment. Groupthink was defined as “a mentality in which group members bound together with a strong cohesiveness tend to make a unanimous decision even when they should make realistic judgments.”

This kind of group gives hasty credit to its own morality, fancying itself equipped with invincible power. Therefore, it becomes extremely positive and acts thoughtlessly. In addition, it overlooks facts that do not suit its own thought processes, and silences opposing opinions inside the group. It also derides rival groups, who are regarded as wicked, weak and stupid. When preparing a policy, its research on alternatives and goals can be full of mistakes. It becomes poor at collecting relevant information and fails to react to situational changes.

The term could be applied to the behavior of the Lee Myung-bak administration regarding the U.S. beef import issue. The administration was not prepared to cope with the negotiations from the outset. It also imagined that the culprits behind the candlelight vigils would be a wicked group of people, and that the stupid public was blindly following. The administration failed to hold additional negotiations to satisfy the people’s demands and did not overhaul the cabinet in a timely manner. What’s worse, the cabinet and the Blue House consist of similarly socially privileged people.

Janis had solutions to cases of groupthink. He suggested the following two methods: Diversify the group, or hire a devil’s advocate who can criticize proposals and assertions.

How about hiring a senior Blue House secretary who can providing opposing points of view?