An ‘Alliance’ that crosses age, genre and nationality

An ‘Alliance’ that crosses age, genre and nationality 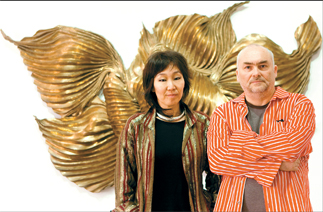 At a quick glance, artworks displayed at doArt Gallery in Sagan-dong, central Seoul, seem like a clash of colors. The works are presented without any respect to genre, the artists’ nationalities, age, status or interests.

The exhibition, titled “The Alliance,” pursues a bonding of 26 artists from 12 different countries, including China, France, Greece and Korea.

The display, which runs until July 13, showcases some 100 paintings, installations, media art pieces, photographs and collages. 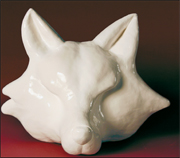 “The exhibition is an alliance of forms, ideas and signs that create a story or a narrative,” said Franck Gautherot, curator for Le Consortium in Dijon, France, who directed the display along with the independent curator Kim Seung-duk. “The Alliance isn’t about artists but their artwork,” Gautherot added.

When Gautherot was searching for his partners for the exhibition, he found Jang Lila, the youngest of the contributing artists. At that time, she was a student at Ecole National Superieur des Beaux-Arts de Paris. Many of Jang’s works are ceramic glazed animals. In The Alliance, Jang is displaying “Loki” (2007), a white-glazed ceramic fox.

“I don’t color my works,” said Jang. Her work is either white or naturally-colored because to Jang, coloring disturbs the original focus.

Tsuruko Yamazaki, 83, from Japan, is the oldest participating artist. She was member of the Gutai Movement, an avant-garde group in Osaka, Japan that searched for new approaches to art. Yamazaki’s works, including “Sakuhin” (1957), are expressionistic. She creates variously colored lights on metals.

Other artworks are the “Turtle,” an oriental oil-painting by Verne Dawson, and Friedmann’s “Karaoke,” an acrylic lacquer on aluminum incorporating tropical birds.

D.J. Howie B, the Scottish producer of Icelandic singer-song writer Bjork’s albums, and U2, the Irish rock group, contributed music.

“The Alliance isn’t made of masterpieces. Instead, it reflects what is happening now in the contemporary arts industry,” said Kim.