Don’t send in the clowns - this is circus as art, not slapstick

Don’t send in the clowns - this is circus as art, not slapstick 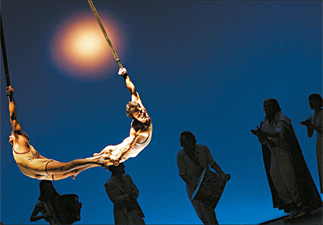 Acrobats fly through the air in the circus performance “Nebbia.” Provided by Cirque Eloize

What makes a sleepy town stir?

Regardless of time and place, a circus can still shake things up, both for the young and the old.

But this time, the performance will be like no other. Unlike old-style circuses, there will be no clowns with frowns and red noses or huge elephants balancing oversized balloons on the tips of their trunks.

There will be no tigers jumping through hoops of fire or poodles jumping ropes.

This show is more akin to a kind of performance art.

Nebbia is Italian for “fog.” The performance debuted in Switzerland last December.

The 1,300-strong Swiss audience responded with a seven-minute standing ovation.

Korea is the first destination in Asia for the Nebbia show.

Cirque Eloize is considered one of the major Canadian circus teams.

Nebbia starts with the main character Gonzales drifting back in time as mist envelopes the stage.

All the acrobatic performances take place in his dreams, functioning like subplots filled with magic.

In one scene, 100 dishes spinning on the top of bamboo sticks suddenly transform into a field of reeds.

In another scene, instead of flying the trapeze, acrobats cling to bolts of crimson cloth.

Daniele Finzi Pasca directs the show. His resume includes directing the closing ceremony of the 2006 Winter Olympics in Turin, Italy.

“[The show] has established a new territory as a modern performance. Every scene is like looking at a scene in a painting,” Won said.

“Nebbia” will take place from July 9 through 20 at the Sejong Center for the Performing Arts.