Defector paints cynical view of life in the North

Defector paints cynical view of life in the North 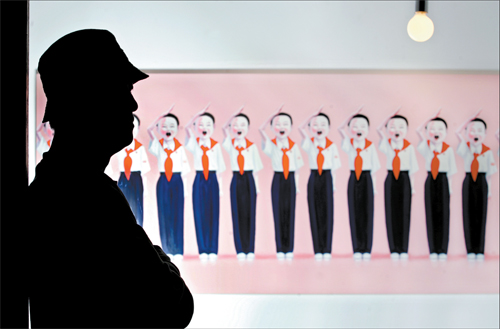 The artist in profile before “Joseon Boys’ Group.” By Lee Chan-weon

Sunmu, 37, lit another cigarette as he looked back at his traumatic past, memories that must seem like a misty dream. It’s been 10 years since he swam the icy water of the Tumen River early one fall morning, leaving his home in North Korea and heading to China.

He said his fear heightened when a dead fish floated by in front of him. The image of death was a stark reminder that, if caught, he could be just another corpse floating down the river.

Sunmu was then a 27-year-old art student in Hwanghae Province. He survived his bid for freedom and he has drawn on that life-and-death moment to create art that paints a cynical picture of the North Korean regime he left behind.

His first solo exhibition, titled with heavy irony “We Live in a Happy World,” is currently on display at the gallery Chung Jeong Gak in Chungjeongno, Seoul. 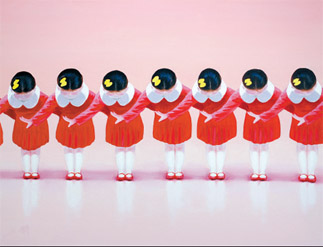 “Thank you” is one of several paintings by Sunmu, an artist who fled North Korea 10 years ago. Trained at Hongik University, he is currently holding a solo exhibition in Seoul. By Lee Chan-weon

Some of the paintings are bold in their criticism of the North Korean dictatorship, such as the painting of a half-naked woman removing her skirt, which is in fact a North Korean flag, and raising her middle finger.

The first painting that greets visitors as they enter the exhibition is that of a young boy dressed in a navy blue North Korean uniform. He’s saluting a portrait of Kim Jong-il, but in the painting Kim’s gaze has drifted toward another woman taking off an item of clothing designed like a North Korean flag.

More striking is that the North Korean flag behind Kim is hung upside down. The artist said he is trying to convey his feelings about the lies of Kim and North Korea.

In the country he left behind, a portrait of Kim is sacred; only those appointed by the Dear Leader himself are allowed to draw his likeness. For someone like Sunmu to paint such a damning portrait would be no less than blasphemy and a strike at the very heart of the system.

The boy in the painting is the artist when he was just 12. On his left shoulder are three red stars, denoting the highest rank given to a student. A three-star rank is equivalent to a student president.

Almost all of the children in Sunmu’s paintings are smiling, under a sign that reads, “We’re happy.”

But the smiles are more frightening than radiant. In the room is a painting of Sunmu’s niece, who was about five years old when he last saw her. 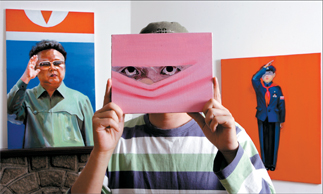 Sunmu stands behind his painting “Across the line” with “God of Joseon” on the left and “Model boy member” on the right.

In the painting, she has fear in her eyes, and a tightly screwed flask represents his family in North Korea, he said, as they are “bottled up” and suppressed.

Lee Eun-hwa, curator at Chung Jeong Gak, said, “There are several North Korean artists active in South Korea and in China, including two at Hongik University, but Sunmu is unique because he expresses his emotions and political views in his work.”

Of all his pictures, the artist said his favorite is “Wish.” The painting is of a pigeon perched outside the bars of prison window. On the wall below the window a message reads in Korean, “My wish, our wish, North Korean Kim Cheol-jun wants to go to South Korea even when dead.”

Sunmu said he saw this message written in a prison cell in Laos when he was waiting to be sent to South Korea. He shared the cell with two other North Korean defectors. They weren’t as lucky as Sunmu. They were tightly tied up in ropes, their wrists handcuffed. They were scheduled to be returned to North Korea where an unknown fate awaited them.

“When I saw that message written on the wall, I felt exactly the same,” Sunmu said. “Dead or alive, I wanted to come to South Korea.”

The young artist left the North not because of political difference or a desire to visit the free world. He risked his life crossing the border because of hunger. It wasn’t an easy choice. “Once you leave the country without permission, you are considered a traitor,” Sunmu said.

Living in North Korea, he has seen what happened to people who are labeled as traitors.

Once in his village a whole family disappeared overnight because the father, who had brothers in South Korea, complained about the North Korean government when drunk. Nobody has heard of the family since and nobody knows where they are.

Sunmu even witnessed public executions. “Some, I think, were just bogus,” he recalled. 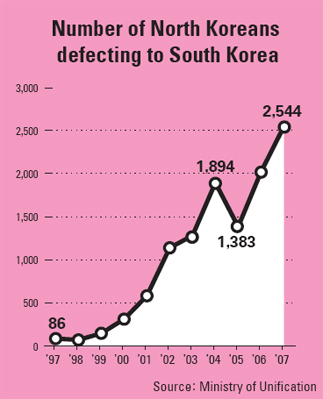 Sunmu is not even his real name. Since escaping, he has been using the name Sunmu, meaning “no line between North and South Korea.”

“To hold an exhibition I couldn’t use my real identity because my family in North Korea could be harmed if the North Korean government learns that I defected to South Korea,” said Sunmu. It is the same reason he never allows the media to take his picture in close up.

Sunmu said he knew crossing the Tumen River was dangerous, but he said he felt he had no other alternative ? he needed food. “I was going to visit a relative of mine in China and ask for some money,” said Sunmu. “I was thinking of coming back.”

But when he set foot in China, he saw a different world. He realized he could never return home. “Everything I knew and believed in just crumbled away,” the artist said. What shocked him most in China was that bean powder, which is a staple in North Korea, was being fed in large quantities to livestock.

“I was completely dumbfounded that bean powder fed to pigs was what my people were subsisting on,” Sunmu said.

From China, Sunmu saw the life of South Koreans for the first time. He realized what he had been told in North Korea was all a lie. “Once I called up the South Korean consulate and asked if the South was as rich as it appeared on television,” Sunmu said. “But the person on the other end told me not to make prank calls and just hung up.”

Discouraged, Sunmu said he didn’t want to learn more about South Korea. What made the young man reconsider was his dire condition. He couldn’t stay too long in his relative’s house and he was in constant fear of being picked up by security forces and sent back to the North.

He found work doing various small jobs such as decorating and working in cigarette factories. He even hung out with a dangerous crowd involved in illegal trade. 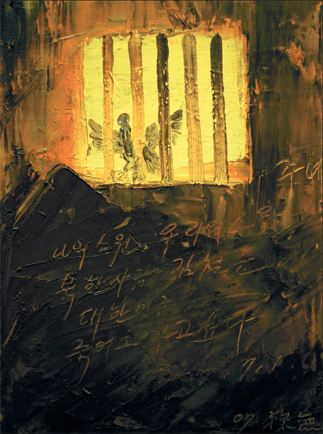 “Wish” by Sunmu, the artist’s favorite among his works.

“But I somehow knew this life couldn’t go on,” Sunmu said. “Most of all I was without a country.” So he decided to take his chances and try to enter South Korea. Friends he made from the illegal trade guaranteed his safety in China.

“I was once almost caught by Chinese authorities. They boarded a bus I was on,” said Sunmu. “Luckily, one of the Chinese gave me his identification.” They even gave him money.

He chose Laos since it was close to the Chinese border. “From Laos, I just relied on luck,” Sunmu recalled. By the time he reached Laos he had spent three and a half years in hiding in China. His first step was to find a Laotian police station and claim he was a South Korean who had lost his passport and belongings.

“The people in Laos can spot the difference between South and North Koreans by their clothing and behavior said Sunmu. “I was lucky.”

Sunmu finally reached South Korea in 2002. “When I came here I wondered what I could do for a living,” said Sunmu. “I decided to do what I do best: painting.”

The young North Korean defector enrolled in one of the most prominent art schools in South Korea, Hongik University, using a stipend from the South Korean government. Although he is holding a solo exhibition, Sunmu does not consider himself an artist. He refers to himself as a painter ? just someone who draws and paints pictures.

He said in North Korea, art students get little exposure to foreign artists’ works. “I thought abstract painting was something you drew by closing your eyes,” Sunmu said.

Just as he has more to learn about art, he is still adjusting to life in the South. “We speak the same language but our culture and the way we think is very different,” said the artist.

What surprised him most when he got to Seoul was the excitement over the 2002 World Cup.

“People came out onto the streets on their own free will to celebrate. In North Korea we were ordered to clap and cheer.”

The exhibition “We Live in a Happy World” is at Chung Jeong Gak in Chungjeongno, Seoul. Go to Chungjeongno Station, line No. 5, exit 9. The exhibition runs through June 27. For more details, visit www.chungjeonggak.com.