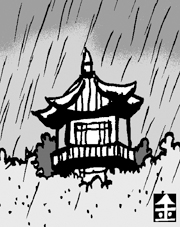 “Wind surrounds a pavilion before rain falls on the mountain.”

This is a verse about foreseeing future disasters. It comes from a poem that Xu Hun, from the Tang Dynasty, recited when he visited Xianyang, the capital during the reign of Emperor Qin Shi Huang.

It starts with the verse, “As clouds form on the edge of the water, the sun sets below a pavilion,” setting the tone for the poem.

The wind that blows toward the pavilion as the sun sets is an omen for rain. The rain may have yet to fall, but the wind symbolizes dangers to come.

Among ancient Chinese, we often penchant for planning in advance for possible calamities and take precautionary measures. Thus, a poet standing on top of a tall building forecasts the rain that will come from a faraway mountain, rather than enjoying the picturesque view before him.

This style of thinking might stem from the wisdom gained from the countless wars and calamities throughout China’s long history.

There is also a similar well-known saying that goes, “When we are at leisure, we must think in advance of possible dangers and take appropriate measures. If we are well prepared, we won’t have any worries.”

It is taken from a historical Chinese book called “Jwajeon.” The writers created these sayings to caution their readers.

Gu Kaizhi, a famous Jin Dynasty painter, played a word game with his friends that involved recalling as many expressions about dangerous situations as they could.

There came verses like, “A 100-year-old man climbing onto a tiny branch of an old tree,” “A newborn baby on the edge of a well,” “A blind man riding on a blind horse heading for a deep pond,” and so on.

The communication problems of the current government, confronted by the U.S. beef import issue, resulted in political insecurity, a reshuffle at the top and various labor strikes.

External factors such as sky-rocketing oil and grain prices are threatening the Korean economy. Unfavorable factors from both inside and outside the country are exacerbating the already difficult situation.

If a society with communication problems can be likened to a blind horseman, then misleading broadcasters are the blind horses.

Now it is raining. The humid monsoon season arrived unnoticed. It is regretful that I can’t get rid of my ominous thoughts about today’s Korea.

The writer is deputy international news editor of the JoongAng Ilbo