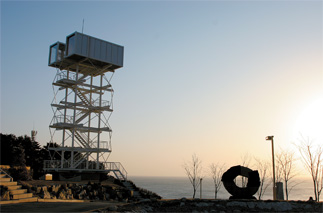 Sky is the Limit” built by a French artist Didier Fiuza Faustino.

YANGYANG, Gangwon Province ? Never in my life have I imagined myself standing in the sun for this long without sunscreen. I never enjoyed tanning and the last time I wore a bikini was when I was four. In an old family picture taken somewhere by the East Sea in the late 1970s, I’m dressed in a red polka-dot bikini, holding my dad’s hand and posing with a disapproving frown.

Decades later, I am standing on a nameless beach overlooking the East Sea in Yangyang County, Gangwon Province. The name of the county means “the place where the sun rises” from its Chinese characters.

I’ve tied up my hair, taken off my sandals and rolled up my jeans to my knees. I can feel the pleasant coarseness of the sand between my toes. The water is deep and clear, nothing like what I’ve seen on other beaches in Korea. Naturally, I close my eyes and for a moment, I lose all sense of place. 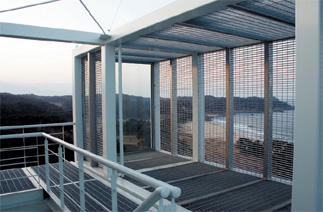 The top of the observatory is made out of steel grating. Provided by Ilhyun Museum

Before I came here, I was too judgemental. A town of the rising sun seemed so cliched, I thought to myself. It was my first visit to the county, and now I can understand perfectly why the place got its name. And now I am a walking cliche. I am soaking my feet underwater, a blur of pale white and turquoise under a blinding sunlight, staring at a little girl running around the beach.

For years, I remained a cynic when it came to summer beaches in Korea. I couldn’t tell whether it was a warning or an invitation when local newspapers ran pictures of crowds and rainbow parasols dotting the sandy beach at Haeundae in Busan every summer. I always joked that the image reminded me of a cockroach nest.

That changed when I came here. My only suggestion for summer vacationers is this: Head to East Sea now. It’s the perfect season to enjoy the most tranquil seashore and salty breeze on the peninsula. And instead of Sokcho or Gangneung, which have traditionally been more popular destinations for beach vacationers, Yangyang embodies the special character of Gangwon; it’s more personal and less pretentious here.

Officially, there are 21 beaches in Yangyang. Naksan Beach is the most famous, frequented by students on field trips. Hajodae, a beach with a pavilion on top of a cliff surrounded by a rugged pine forest and spectacular rocks, is another site that lends itself to a subliminal view. Standing across from the popular pavilion, a sign indicates the 38th parallel, which divided Korea in 1945. 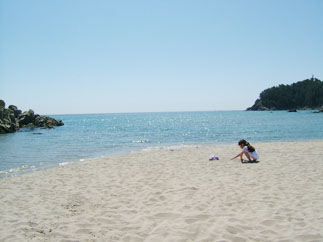 The sandy beach in front of the Sol Beach Resort in Yangyang. By Park Soo-mee

There are other beaches in this county that aren’t even named, and the one I am standing on now in front of Sol Beach Resort is one of them.

Another joy here is to witness the sprouting forest at Naksan Temple, which burnt down in a massive fire in 2005. Over the last three years, the county has suffered an enduring period of loss and recovery. Its sanctuaries and pavilions have been reduced to ashes and it’s lost a lot of visitors to neighboring cities.

Before the fire, Naksan was as an iconic tourist temple. Built on the edge of a cliff, the pagodas looked over the East Sea, attracting an average of 1.5 million visitors a year. Over 1,000 people participated in their temple-stay program every year, according to the temple authority.

After three years of restoration, the sanctuaries and a hill-top pavilion called Hongyemun were rebuilt. In the forest, young trees have began to grow green leaves, thanks to 8.7 billion won ($8.6 million) worth of work. Still, you see burnt tree trunks and branches here scorched so severely they remain leafless. 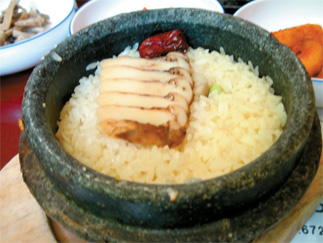 A hot pot rice of pine mushroom and date, a local delicacy in Yangyang County. By Park Soo-mee

Critical losses from the fire were a statue of a sitting Buddha and a bronze bell commissioned by King Yejong (1450-1469) for his father, King Sejo (1417-1468). The bell melted in the blaze and was remade last year.

In the temple last week, fundraising was still an ongoing project. Visitors were marking their names and making wishes on giwa, or roof tiles, and then making a suitable donation. The tiles are used to build the remaining complex of the temple.

After a stroll, my companion and I headed to lunch. Delicacies in Gangwon are a bit predictable: They often involve potatoes and buckwheat as the main ingredients. But Yangyang is known mostly for its pine mushrooms, a premium gift during major Korean holidays like Chuseok, Korea’s Thanksgiving. 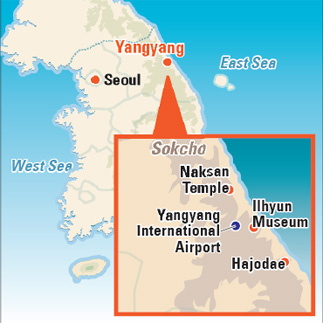 We went into a restaurant recommended to us by our taxi driver and ordered a set meal of rice steamed in a hot pot with pine mushrooms.

The rice pot is cooked with dates and thin slices of pine mushrooms on top. The aroma of mushroom was thick as soon as we opened the lid.

It’s hard to describe the taste. The dictionary says the mushrooms have a firm texture and subtle fragrance, but they could be described as having a kind of non-taste.

The texture is not chewy or have a peculiar aftertaste as with shiitake mushrooms or king oyster mushrooms. Nevertheless, the taste is deep and soothing. That might just explain the price.

Pine mushrooms are highly valuable, mainly because of their rarity. They only grow near pine trees aged between 20 to 90 years during the fall. They’re also known for their delicate nature. To preserve them, you have to wrap them in a vacuum pack and freeze them at minus 30 degrees Celsius (-22 Fahrenheit). Once you take them out of the freezer, you have to eat them in less than ten minutes to enjoy the original fragrance and taste.

Perhaps because of their peculiarity, an old book of medicine cites pine mushrooms as the best among other varieties.

After lunch, we drove to the county’s new landmark, “Sky is the Limit,” an art observatory created by French artist-architect Didier Fiuza Faustino. Built on a hill overlooking Dongholi Beach in the compound of Ilhyun Museum, the building, which looks like a mechanical crane, tests your acrophobia. In the artist’s own words, it was built to “intensify the human sensibility.” It does exactly that.

The building is 15.6 meters (51 feet) tall, roughly the height of a seven-story apartment. The entire ladder is made out of steel grating, so you can see the ground as you climb up.

When you reach the top, there are two rectangular shaped rooms. Both serve as observation points over the sea. In the southern room, you are boxed between two glass windows and steel panels; in the northern room, the ceiling and the floor is finished with steel grating, the same material used for the ladder. If you stand next to the window, you feel like you’re floating above the waves.

In the gallery downstairs, the artist explains an analogy of his work through a display of preliminary sketches and letters exchanged between the artist and the commissioner. Faustino says the rooms were designed to give the idea of fraternal twins who look the same but underwent different experiences.

“I could barely stand with my eyes open,” says Gwak Sun-ok, a visiting taxi driver. “I felt like I could fall into the sea at any moment.”

As we drove back to our hotel, we took the seaside road, passing a string of ports, lighthouses and seafood markets.

Without the crowds and dotted parasols, I felt like I had just been to the Maldives for the first time.

The fastest way to get to Yangyang is to take a bus, which takes about three and a half hours. Buses leave from Seoul Express Bus Terminal or East Seoul Terminal. If you want to drive, take Olympic Highway, passing Paldang Bridge and No. 5 National Road through 44 National Road toward Hongcheon. From there, take Hangyeryeong, which leads to the county.

Sol Beach Resort, (033) 670-3617, is a Mediterranean-style resort offering a water park and spa facilities. Hotel packages start from 184,000 won ($179), and larger suites have outdoor Jacuzzis on the terraces.

Downtown Yangyang hosts an outdoor market on days that end with 4 and 9. You can buy seaweed, mushrooms and rice cakes there.